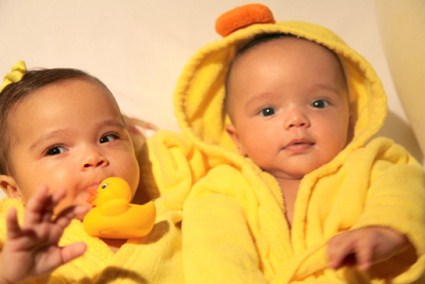 Mariah and her family are currently holidaying in Europe. The singer and husband Nick renewed their wedding vows in Paris last week at the Eiffel Tower. It was a gorgeous ceremony. Now they’ve headed to Austria on their private jet. What a way to spend your first birthday! Monroe and Moroccan won’t remember the trip but I’m sure there’ll be lots of photos taken. Their passports will be getting plenty of stamps!

Before leaving France, Mariah shopped up a storm buying lots of goodies for her twins. She tweeted ‘shopping for Roc & Roe’s bday in Paris…Dembabies, dembabies,dembabies!’ and later added ‘We have put together some very festive plans!‘

Not long after the double bundle of joy arrived last year Nick told People magazine ‘This whole journey has been eye opening, Mariah will tell you that. It’s just the beginning, so I’m expecting it to change a little more,growing every day and knowing that I have to be an example for two lives.’ He also has plenty of dreams and aspirations for the cute pair. He told 20/20 ‘I want them to be able to sing as beautifully as their mother. I want them to be able to play instruments and everything. But I want them to like … ‘Go get a Ph.D‘.

A New Baby for Sir Elton John and David Furnish