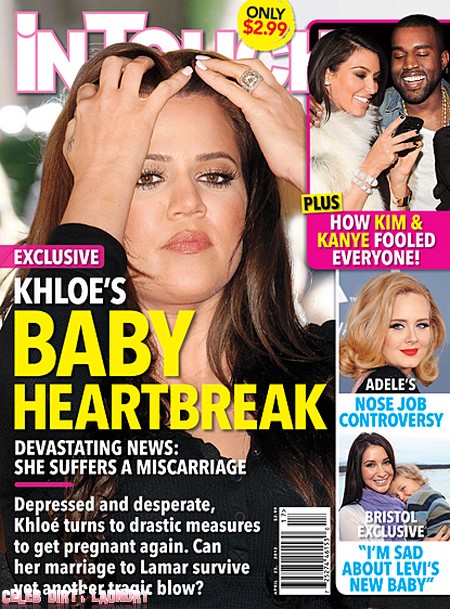 InTouch has an exclusive story on the devastating news – that Khloe Kardashian has suffered a miscarriage.   The magazine claims that  Khloe has turned to drastic measures to get pregnant again because of her baby heartbreak.  Khloe has been rumored to be trying to get pregnant for a long time.  They go on to speculate whether her marriage to Lamar can survive yet another tragic blow?

In Touch has more: For Khloé, her problem is that her husband, Lamar Odom, has put his basketball career before his baby-hungry wife. The onetime social butterfly has become a recluse in her new Dallas home. “She’s so depressed,” says a friend.

Add to all this Lamar Odom has resigned from the Dallas Mavericks just as the team was about to cut him from their roster.  Lamar will blame Khloe for this humiliation but he is wrong to do so.  Nobody forced Lamar to take on the Kardashian famewhore mantle – he eagerly put it on and ignored his athletic talent in order to be a big TV star.  Can Khloe and Lamar’s marriage survive her desperation for a baby and his failing career?  Hit the comments and let us know your thought!

Mark Wahlberg And His Kids Play In The Pool