Mark Wahlberg And His Kids Play In The Pool 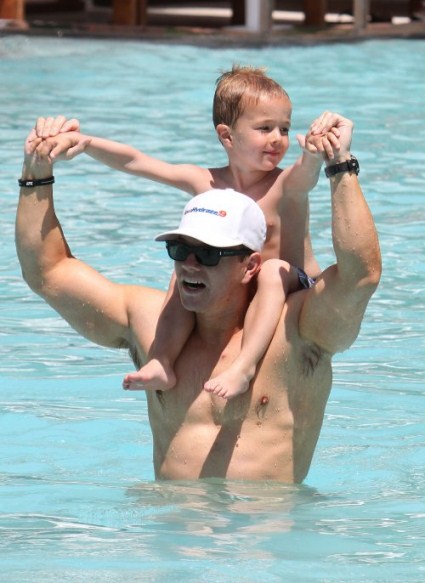 Plenty of fun in the sun for actor Mark Wahlberg and his brood. The actor spent Tuesday relaxing with his wife Rhea Durham and their four kids in Miami, Florida. He loves fatherhood and the pictures prove it.

Mark and Rhea were joined in the water by their 8 year old daughter Ella Wahlberg, 6 year old son Michael Wahlberg, Brendon Wahlberg who’s just 3 and 2 year old Gracie Wahlberg. The 40 year old loves nothing more than spending time with his children so he made the most of a day off from filming. He was spotted carrying his youngest son on his shoulders and watching out for his youngest daughter when she decided get out of the water.

The family man opened up to Men’s Journal in February about putting his wild days behind him and embracing family ‘Yeah, a lot of people I thought were my friends were disappointed that I decided to settle down and don’t take them on whirlwind tours of craziness anymore. If they were my friends, they would have been happy for me changing my life and growing up‘.

Mark is especially protective of his two daughters but knows there will come a time when they start dating ‘I’m not going to think about that right now. When the time comes, I will, but it’s not a good thought for me to have. Thinking about it really stresses me out, so don’t stress me out right now, because that’s a stressful thought, OK?