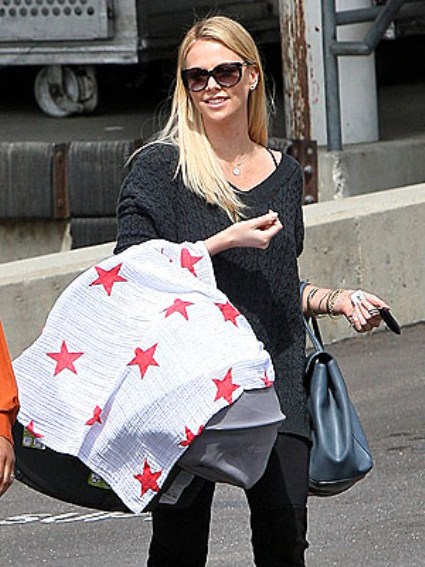 Charlize Theron stepped out with a very special person in her life on Tuesday in Los Angeles. The Oscar winner decided to take Jackson Theron on his first public outing. But he didn’t see much – and neither can we – thanks to the well positioned baby blanket!

Charlize  – who recently adopted the four month old – has kept him away from the cameras …and yesterday was no exception. She took her baby boy to the post office to get a passport. It’s not known whether she’s planning a trip back to her native South Africa to introduce her little one to her family. Or whether she’s off to shoot a new movie or hit the promotional trail. Either way – the number one man in her life needed a passport. He’s going to be a well travelled kid!

The 36 year old announced the new addition to the family earlier this month. She finally welcomed a child after a lengthy adoption process and has been gushing about her boy ever since. Friends says she’s wanted to be a mother for a long time. The fame and fortune didn’t mean anything  – she just wanted a child and was prepared to go it alone when it came to parenthood.

But for now little Jackson’s face remains a mystery. Charlize even had him well covered while getting into and out of the car. He was protected from prying eyes and the paparazzi. Everyone is keen to have a peak at her little boy but she’s not sharing him with the world just yet.