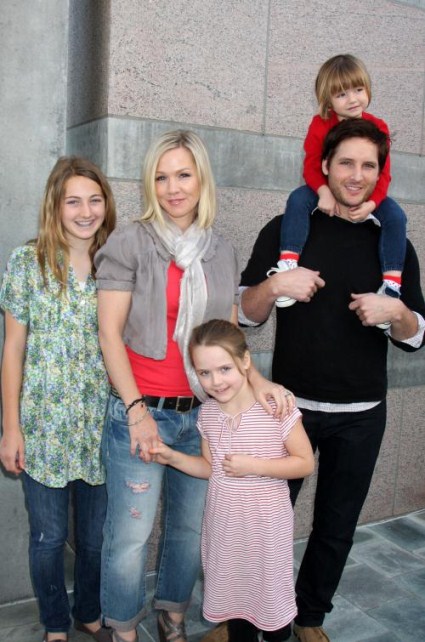 Jennie Garth‘s marriage to Peter Facinelli is now officially over. They separated two weeks ago – but yesterday the Twilight actor filed for divorce in LA citing ‘irreconcilable differences‘. He is also asking for joint custody of their daughters.

They were married for  11 years and together even longer. Jennie has told People magazine how the pair broke the news about the split to their children. They have three girls  – 14 year old Luca Facinelli, Lola Facinelli who’s 9 and Fiona Facinelli aged 5.

The former star of Beverly Hills 90210 says a split is so hard when there are kids involved ‘It was never the right time. There were birthday celebrations and Christmas and we always thought, ‘Let’s keep it together for the kids.’ We both saw it unravel and it was painful. I tried everything to save our marriage. I was very resistant. I didn’t want it to happen…. I would take the girls to school, then go back and get into bed and not get up again until it was time to pick them up from school, and I had to pretend everything was fine.’

In the end Jennie and Peter decided grief counseling was the way to go. So they attended sessions as a family. It was a very difficult process ‘I just held them. They cried. I cried. It was really hard.’ But she’s adamant the girls deal with the changes in their own time and that’s its not a contest between who loves Mom or Dad more ‘We make it very clear to them they don’t have to choose sides.’