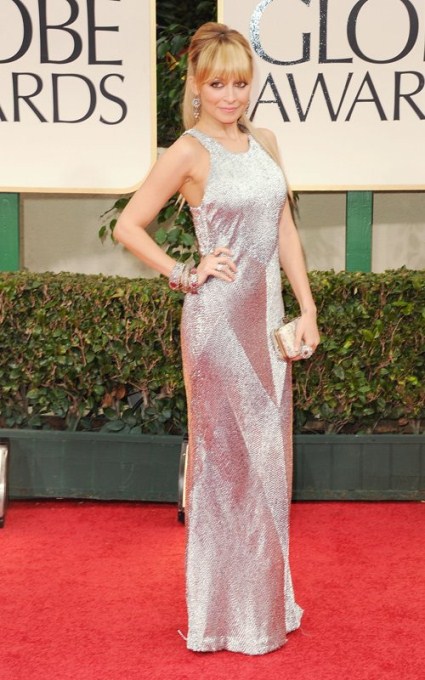 When it comes to a ‘yummy mummy’ it’s hard to go past Nicole Richie. The mother of two looked absolutely stunning at the Golden Globes last night. She was a vision in silver!

The 30 year old former reality TV star left Harlow Winter Kate Richie Madden and Sparrow James Midnight Madden at home and enjoyed glamming it up with the who’s who in Hollywood. She wore a floor length silver dress by Julien Macdonald and some sky high Jimmy Choo shoes. The budding fashion designer finished off the gorgeous outfit with a bag from her popular House of Harlow line. The up do was also a winner with the fashion critics. The combination lander her on many Golden Globe best dressed lists.

Life is super busy for Nicole and husband Joel Madden – who’s in the band Good Charlotte with his brother. They have two kids under five and several careers to juggle. But their son and daughter always come first. The family of four spend a lot of time together out of the spotlight. Nicole is very hands on –  organizing their birthday parties, taking them to and from pre-school and arranging play dates with some of their famous friends.

She’s come a long way from the party girl who first shot to fame in the series The Simple Life. There were a few brushes with the law early on but she’s reinvented herself. She’s an established designer and fashion icon and it looks like she’s finally found her calling – being a Mom.