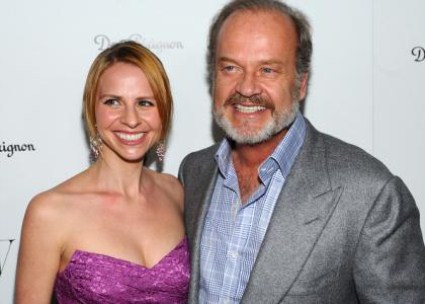 Kelsey Grammer and wife Kayte Walsh have some big news – they’re expecting! But that’s not all. They’re having twins!

The 56 year old confirming the wonderful news to WENN ‘Fatherhood is always different based upon the character that comes into your life. They arrive and tell you what to do. I’m really looking forward to meeting these new arrivals in our lives, yes twins. My wife will make an extraordinary mother. She’s one of the most loving, amazing, warm human beings I’ve ever met… I think she’ll blow ’em away.’

Kelsey Grammer is no stranger to fatherhood. These will be his  fifth and sixth children. The actor best known for playing Dr Frasier Crane in Cheers and then Frasier on the small screen has two children with his previous wife Camille Grammer –  ten year old daughter Mason Olivia Grammer and seven year old son Jude Grammer. He also has a 28 year old daughter Spencer Grammer and 20 year old Greer Kandace Grammer.

It’s all new for Kayte though – she’s going to be a Mom for the first time. She’s reportedly in her second trimester. She’s taking things slow after suffering a miscarriage just over a year ago.

Kelsey and Kayte  married in February 2011. The 32-year-old former air stewardess began dating the actor not long after he and Camille officially separated in 2010.

It’s been a big 24 hours in the Grammer household – announcing to the world they’re expanding to a family of four….and Kelsey winning a Golden Globe. The dad to be won the gong  for best actor in a TV drama series for his role in Boss.