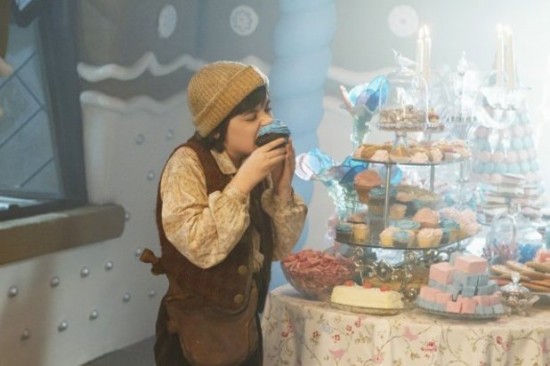 Tonight ABC’s hit show Once Upon A Time airs with a whole new episode.   It is the 9th episode of the first season and it is called ‘True North.’  On last week’s show a lot of questions were answered about Rumpelstiltskin.  It was interesting find out how Rumpelstiltskin went from a mild mannered, coward who deserted in the Ogre War to the ‘Fearless Evil Dark One?’ If you missed last week’s episode you can read our recap here.

On tonight’s show: Feeling their pain from having lived through the same experience, Emma desperately tries to help two homeless children find their birth father before they’re separated and put into the foster care system. Meanwhile, back in the fairytale world that was, the Evil Queen coerces Hansel and Gretel into stealing an important artifact from a blind witch (Emma Caulfield, “Buffy the Vampire Slayer”), on “Once Upon a Time,” SUNDAY, JANUARY 15 (8:00-9:00 p.m., ET) on the ABC Television Network.

If you have not watched the show the story take place in the fantasy world of Snow White and the ‘reality’ setting of Storybrooke, Maine.   Each week we meet different fairy tale characters that live in Storybrooke.  The show stars stars Ginnifer Goodwin as Snow White/Mary Margaret, Jennifer Morrison as Emma Swan, Robert Carlyle as Rumplestiltskin/Mr. Gold, Lana Parrilla as Evil Queen/Regina, Jared Gilmore as Henry Mills, Josh Dallas as Prince Charming/David and Raphael Sbarge as Jiminy Cricket/Archie Hopper.

Our sister site Celeb Dirty Laundry will be live blogging tonight’s episode at 7PM, recap of Once Upon A Time – True North here.

You might also likeMore from author
Once Upon A Time