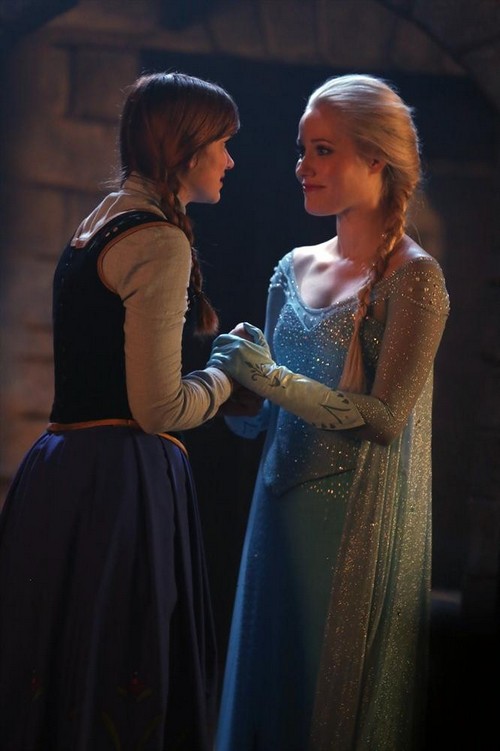 Our favorite fantasy drama ONCE UPON A TIME returns tonight to ABC with a new episode and the season 4 episode 8 called, “Smash the Mirror.”  On the last episode, Emma captured the Snow Queen and interrogated her at the sheriff’s station. But the Snow Queen used her prior knowledge of Emma to try to persuade her into thinking that they were more alike than she could possibly imagine. Regina and Robin Hood’s relationship grew increasingly complex as they struggled to find a way to save his dying wife.

Emma began to see what she missed out on by not growing up and being a family with Snow and Charming when she saw how involved Mary Margaret was in baby Neal’s life, and Henry began his after school job in Gold’s shop while trying to help Regina find a clue to the identity of the author of the storybook. Meanwhile, in Arendelle of the past, we learned about the origin of the Snow Queen and her familial connection to Elsa and Anna as we got to see her discover her spectacular yet deadly ice powers. Did you watch the last episode? If you missed it, we have a full and detailed recap right here for you.

On tonight’s episode as per the ABC synopsis, “in Arendelle, when the Snow Queen tries to pit Elsa and Anna against each other and it proves more difficult than she anticipates, she takes drastic measures. Meanwhile, in Storybrooke Emma’s powers are out of control and her fear of hurting loved ones pushes her away from everyone she cares about. In her confusion, Emma turns to Gold for help getting her powers under control. Gold tells her about a way to get rid of her powers altogether and Hook tries to put a stop to it. Meanwhile, Regina struggles with her plan to find the author of the storybook until her quest takes an unexpected turn. Robin Hood recruits Will Scarlet to assist him on a mission and Mary Margaret and David search for Emma in this special, two-hour “Once Upon a Time.”

ONCE UPON A TIME SEASON 4 EPISODE 8 LIVE RECAP, CLICK HERE …

Ways To Make Your Home Safe For Your Toddler

Ali Larter Shows Off Her Bump on the Red Carpet