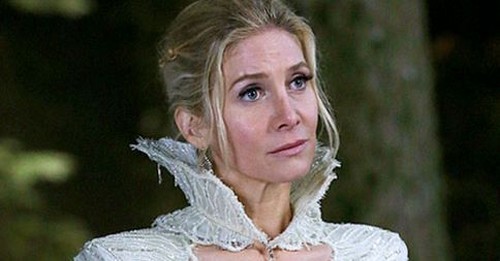 Our favorite fantasy drama ONCE UPON A TIME IN WONDERLAND returns tonight to ABC with a new episode and the season 4 episode 7 called, “The Snow Queen.” On the last episode, the race was on to track down the elusive Snow Queen, who was once a foster mother to a young Emma – whose memories of this event had been erased – in order to discover what her ultimate end game was for Elsa and the residents of Storybrooke, and unaware that she did not possess the real blade that controlled The Dark One, Belle attempted to use it to get her reluctant husband to show her where the Snow Queen was hiding.

Meanwhile, back in the past, Belle traveled to Arendelle and, with Anna’s help, sought out Grand Pabbie to help her regain her lost memories in order to discover the fate of her mother. Did you watch the last episode? If you missed it, we have a full and detailed recap right here for you.

On tonight’s episode Emma [Jennifer Morrison]  captures the Snow Queen [Elizabeth Mitchell] and interrogates her at the sheriff’s station. But the Snow Queen uses her prior knowledge of Emma to try to persuade her into thinking that they are more alike than she could possibly imagine. Regina and Robin Hood’s relationship grows increasingly complex as they struggle to find a way to save his dying wife, Emma begins to see what she missed out on by not growing up and being a family with Snow and Charming when she sees how involved Mary Margaret[Ginnifer Goodwin] is in baby Neal’s life, and Henry begins his after school job in Gold’s shop while trying to help Regina find a clue to the identity of the author of the storybook. Meanwhile, in Arendelle of the past, we learn about the origin of the Snow Queen and her familial connection to Elsa and Anna as we see her discover her spectacular yet deadly ice powers.

Tonight’s season 4 episode 7 looks like it is going to be as magical as ever so make sure that you tune in and also join us for our coverage for ABC’s hit show at 8:00 PM EST!  While you wait for the recap, check out a sneak peek below!

ONCE UPON A TIME SEASON 7 EPISODE 4 LIVE RECAP, CLICK HERE ….

How To Encourage Healthy Eating In Kids