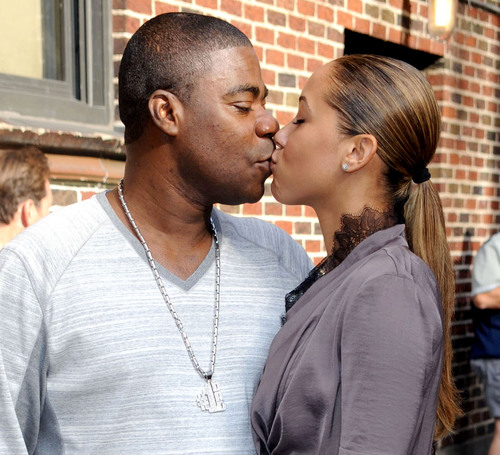 Tracy Morgan has declared that he and fiancée Megan Wollover have planned a double-whammy: they want to get married AND have children! Morgan seems to be completely infatuated with his new love:

Morgan has three kids(3 sons) with ex-wife  of 21 years Sabrina who also happened to be his high-school sweetheart. The comedian, however, seems eager to add  to his collection. Who knows, maybe this time it could be a girl?

“(We met) through a mutual friend, hanging out. He introduced us and we took it from there. It was a blind date, actually it was a meeting. She was with her friend and I was with my homeboy and we met and we started talking and me and her took it from there. And she’s been with me ever since.”

Morgan says that the thing that attracts him to his 18 year younger fiancee is her smarts: she’s studying to become a doctor. “She’s a really smart person, that’s the thing I love about her. She’s gonna be a doctor. It’s cool, we (sic) going to have some kids and everything.”

“I got down on one knee and asked her if she would have my last name: ‘Will you marry me?’ She said, ‘I’ll represent that to the fullest’. (We’ll) probably (get married) this summer. We haven’t set a date because we’re still checking each other out.”

Morgan divorced his ex-wife in 2009 and started dating Wollover in 2011. Only a month after that, the couple decided to take it to the next level and get engaged – this was announced in September 2011. It certainly seems like the couple sees no reason for ‘taking things slowly’ but they should be careful of rushing into it as we all know where that can lead to.