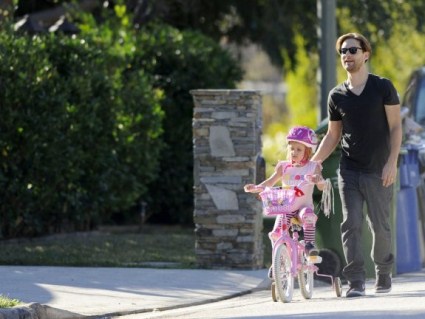 Tobey Maguire was on Daddy duty in California yesterday. The actor was seen helping five year old daughter Ruby Maguire master the art of riding a bike. I wouldn’t be surprised if the bike was a Christmas present because she still has the training wheels on.

The pair were spotted in the Pacific Palisades where the star lives with wife Jennifer Meyer and their son Otis Maguire. The family are back after several months in Australia. That’s where Tobey is shooting The Great Gatsby with Leonard DiCaprio and Carey Mulligan. He plays Nick Carraway in the updated version due out this December.

But movie making was the furthest thing from his mind on Monday when his little girl needed a helping hand on her shiny pink set of wheels. Tobey stayed close and made sure she was in no danger of falling off and getting hurt. Ruby was also wearing a bike helmet just in case she got into trouble.

They headed for a local park. When they arrived Ruby took off her helmet and the two sat and cuddled on a bench. Spiderman never looked so content! Tobey is a homebody at heart. It’s not the first time he’s been snapped having some quality time with his eldest child. They obviously have a very close relationship and she loves getting her Dad all to herself every now and again. There was no sign of Mom or Ruby’s little brother Otis. Maybe they were having some Mommy-son bonding time too.