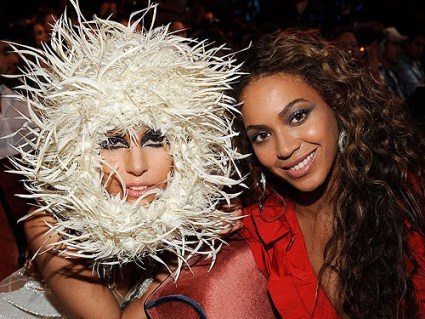 Beyonce is going to have the best dressed little girl we’ve ever seen. Blue Ivy Carter probably has a closet full of designer goodies already – and she’s less than two weeks old. She also has a very special outfit from Lady Gaga.

The Queen of shock – who teamed up with Bey a couple of years back for the hit Telephone – has reportedly made Blue an honorary ‘little monster‘. The Sun newspaper says Gaga has given the little princess a one of a kind onesie with the phrase ‘Little Monster‘ on the front. But because this is Gaga …it’s not any ordinary onesie. The words are written in pink diamante. Little Monster is what the Poker Face singer calls her army of fans.

An insider says Miss Gaga wanted to give her friend’s first born something special ‘while they don’t speak often, they are always in touch via email and text. She knew Beyonce would find the present hilarious.” Blue Ivy is a lucky girl getting a present from the most famous woman on the planet.

Meantime we’re yet to see a picture of the newborn. Beyonce and Jay Z are keeping their precious daughter out of sight for now. The new Mum is also keeping quiet. There’s been just the one statement confirming the birth and name. A US tabloid claimed to have the first interview with the singer talking about her little girl. Beyonce’s Rep says the story is not true because her client hasn’t granted any interviews since giving birth.

The Wiggles Welcome Back Greg Page