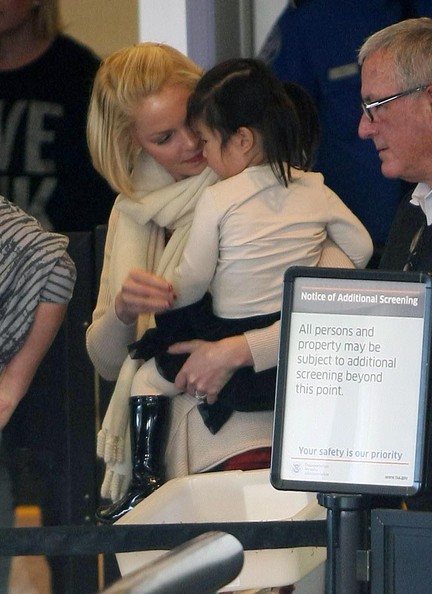 Katherine Heigl was seen catching a flight to an unknown destination with her three-year-old daughter Naleigh at LAX airport on Saturday. Heigl who was dressed in a red dress with a cream colored sweater and scarf was pictured holding Naleigh while waiting to pass through airport security. Heigl’s parents, Nancy and Paul Heigl were also present.

In a interview with Scholastic’s Parent & Child Magazine, Heigl opens up about the difficult process she had bonding with her adopted daughter Naleigh.

“She felt really comfortable with Josh and they bonded quickly. It was harder for me. Our social worker told us that it’s pretty typical for kids to react differently to their new mother. It was a struggle for me because all I wanted to do was bond with her. But it takes time for a child to trust this new situation and to trust you. My advice is don’t be discouraged. The reward is so great.”

Heigl admits she had to embrace who she is as a parent in order to fully bond with Naleigh:

“I had to embrace who I am as a parent. I watched Josh, and it was so effortless for him. I call him Disneyland Dad — he’ll get on the floor and roll around and make her laugh. That wasn’t really me. So I felt like, oh gosh, I’m not the kind of parent she prefers. Then I realized — I’m the cuddler. I’m the one she comes to if she’s hurt. And I have a ritual for putting her to bed. She has one blankie that goes over her, one that goes by her face, and one that she holds. It’s our little thing.”