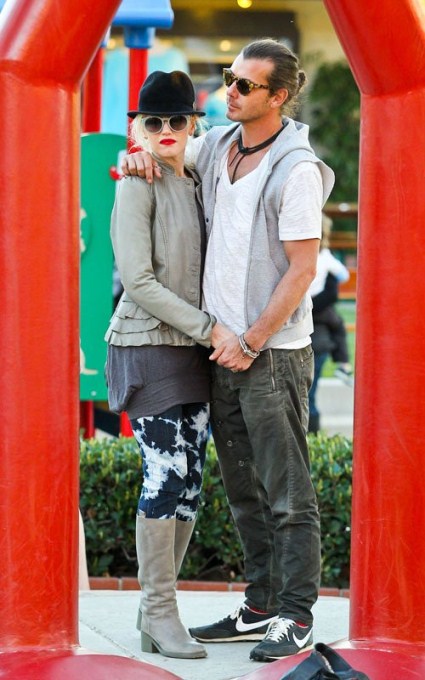 If there is trouble in Gwen Stefani and Gavin Rossdale‘s marriage they weren’t showing it during a trip to the park in Malibu over the weekend. The couple looked very rock ‘n’ roll as they watched their two sons Kingston Rossdale and Zuma Rossdale play on the equipment.

Rumors have been rife that Gwen and Gav are on shaky ground. Many are tipping they’ll be the next celebrity split after Heidi Klum and Seal. A source was quoted in Star magazine saying ‘They have a roller coaster relationship , and right now it has flown of the tracks.  They’re fighting non-stop.  The main problem is that when they got together it was Gavin who had the big career.  But over the years he has had to watch as his rock-star status dwindled and hers soared to stellar levels.  That’s really been a hard journey for him‘ Even Gwen’s brother Eric Stefani was asked about the rumors and said a split was ‘ possible’.

But it was all smiles over the weekend as the paparazzi followed the family’s every move hoping for a sign of trouble in paradise. Kingston and Zuma looked uber trendy. Gwen always makes sure her boys are the cutest kids on the block. They’re often spotted in clothing from one of her fashion lines for children.

We all hope the talk of an imminent split is not true. They have two gorgeous boys who love their Mom and Dad very much. It’s awful to see a young family broken up by divorce