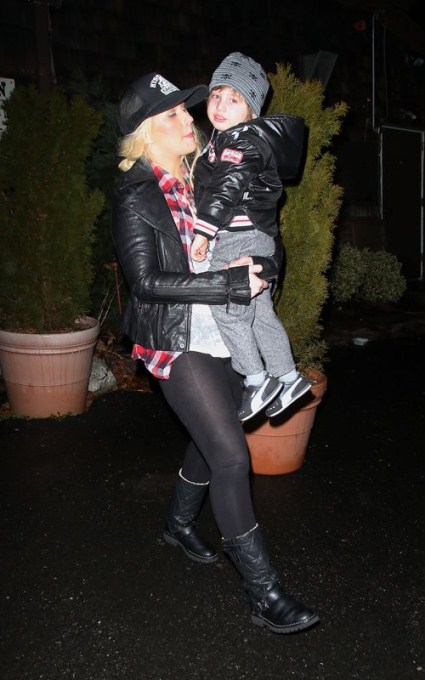 Christina Aguilera is making sure there’s plenty of  time with the number one man in her life over the holidays. She had dinner with three year old son Max Bratman last night in New Jersey. They were spotted enjoying a meal at The Barn. They even had matching leather jackets! Too cute!  The singer’s boyfriend Matt Rutler was also there as the trio celebrated the start of 2012 – but it was Max getting all the hugs and kisses from his superstar Mommy as they left the restaurant.

The former child star has been spending some down time on the East Coast. She’s no stranger to that side of the country despite living in Los Angeles most of the time. The 31 year old mum of one was born on Staten Island.

It looks like she’s relaxing and getting in some quality ‘Mommy’ time before her workload ramps up again. This year brings a new album. There’s also a new series of  The Voice. The second season of the popular talent show will premiere on February 5 after the Super Bowl. Although Christina always makes Max her priority despite her crazy schedule which is split between the recording studio and television.

Max is looking more and more like his Dad – Music Exec Jordan Bratman. His parents are sadly no longer together. They announced their divorce in October 2010. The former Mickey Mouse clubber sought joint legal and physical custody of their son. They later reached an agreement – the details of which remain private. It looks like they’re doing a fantastic job.