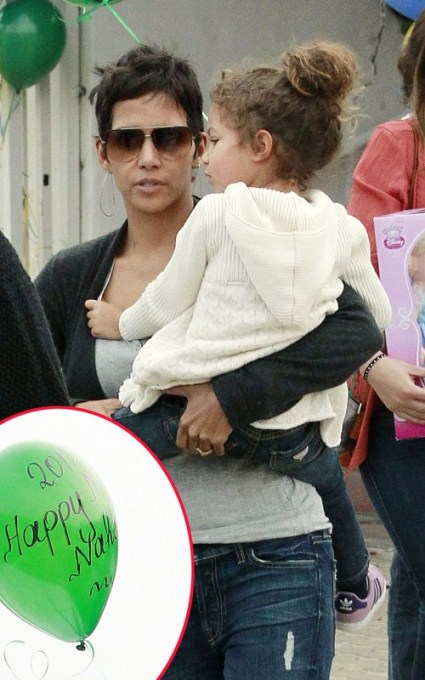 Halle Berry has a mini me. Three year old daughter Nahla Aubry has inherited her Mom’s stunning looks and funky, cutting edge style. The pair were spotted in Los Angeles over the New Year when the actress took her to a kids party. Halle’s boyfriend and former co-star Olivier Martinez also spent the day with the family but stayed out of view of the cameras.

So what does an Oscar winner’s young daughter wear when she’s off to a party? Nahla was going for the casual look. Denim jeans, a white hooded jacket and the cutest little purple Adidas trainers I’ve ever seen. The former Bond Girl didn’t look too bad either! Like mother, like daughter!

It looks like Nahla had fun on her outing. She was seen leaving the party with a green balloon featuring her name. It’s not long now until Halle’s daughter has a birthday herself. She turns four on March 16.

The actress – once crowned the Sexiest Woman Alive by Esquire magazine – was last on our screens in New Year’s Eve. She played a nurse called Aimee  in the popular comedy. She has two films due in theaters this year – Cloud Atlas and Movie 43.

But first she has a date with the Courts.  Her alleged stalker Richard Franco‘s trial gets underway on January 19. He is facing almost seven years jail. He was charged with felony burglary and stalking after being nabbed trying to sneak onto her California property last year.  He was busted not once – but three times.