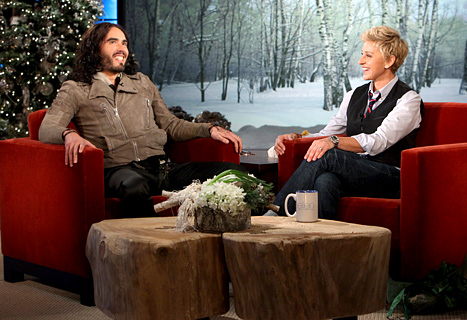 Russell Brand’s  paternal instincts were kick-started after he was asked to be godfather to his friend’s one-year-old twins, and the boys have taught him about the joy of nurturing and care.

When asked by TV host Ellen DeGeneres if he and his pop star wife, Katy Perry are planning a family, Russell replied:

“I would like one. I love those little babies in the beginning. They’re so lovely in that bit. Me and Katy are godparents to two twin boys. They’re called Sam and Donovan.”

“At first they were boring. They were just essentially little fluid factories, generating fluids – no regard for what I was wearing.

“Now, they are interesting. They smile and look at me and wonder – I’m just observing them like I’m a scientist.”

In his interview for ‘The Ellen DeGeneres Show’, Brand also brushed off rumours that their marriage was in trouble.

He joked: “There are always rumours aren’t there? In the end you have to just not engage with Internet technology, which is difficult because of a lot of the nude women websites I quite enjoy.

“But they’ve had to go. I’ve treated the whole Internet now like it’s a wicked little liar. Yeah. I am really happily married.”

A Few of My Favorite Things, Mom Edition!