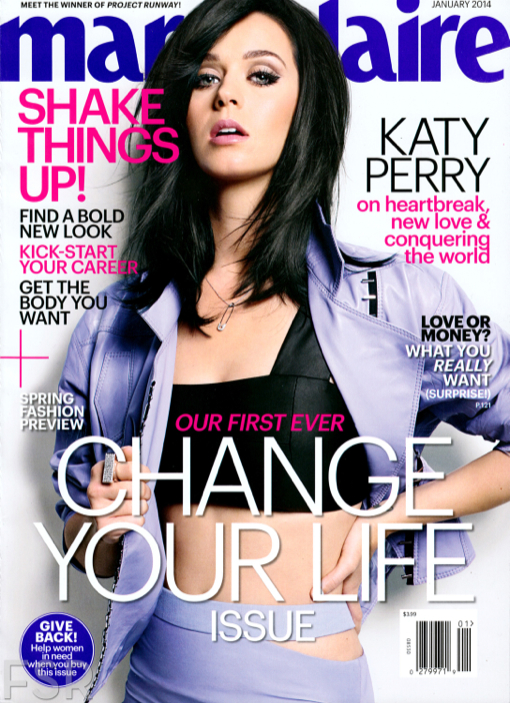 Past relationships can, and most definitely do, affect one’s future course of action. In this case, Katy Perry still blames her marriage fail – though it seemed doomed from the start – to comedian and, let’s be honest, playboy Russell Brand for her feelings of anxiety when thinking about the possibility of pregnancy. Although she says she’s verry happy with current partner John Mayer, she still feels a ways off from making that huge step that seems to give certain celebrities all kinds of nightmares – after all, they DO have to sacrifice their public image for some time right?

When the issued was raised to her in the January 2014 edition of Marie Claire, she responds:

“I’m definitely not there yet, and I can’t plan that far in advance,” she says. “When I decide to have a family, I’ll just want to be Mom for a little bit.” She goes on to clarify her and Mayer’s: “He’s just a fantastic partner,” confirms the pop singer. “I’ve been a fan of his for such a long time. He’s got a brilliant, brilliant mind. It’s a rad, mature relationship.”

Even though she says all these great things about their relationship now, she goes on to say that Russell Brand was also the reason why she was forced to temporarily break away from Mayer. Perry said:

“I took a break from my boyfriend, not one that I wanted,” she affirms “It was like a splash of cold water to search inward on what was going on with me. That is what led me to this new awakening, this realizing, ‘If I don’t do some self-love, I’m not going to be able to keep the love that I want.’ “Was her relationship to the British comedian, whom she supposedly met while he was filming Get Him To The Greek back in ’09, really that traumatizing? It had a nice ending and all…”I still needed to deal with all of my ex-husband stuff. I hadn’t,” she adds. “It’s almost like if I kept talking about it, it would seem like I actually cared about it. I don’t” He must of cheated on her pretty bad.

But maybe it’s not all bad Brand’s fault. Maybe, just maybe, Perry feels just slightly that her career could possibly take a noise(not a typo) dive by an untimely and unwelcome pregnancy. Maybe she realizes just how competitive the pop industry really is and she knows that she isn’t getting younger. Just maybe.

Feel Pampered Rather Than Stressed While Holiday Shopping #AvionVIP