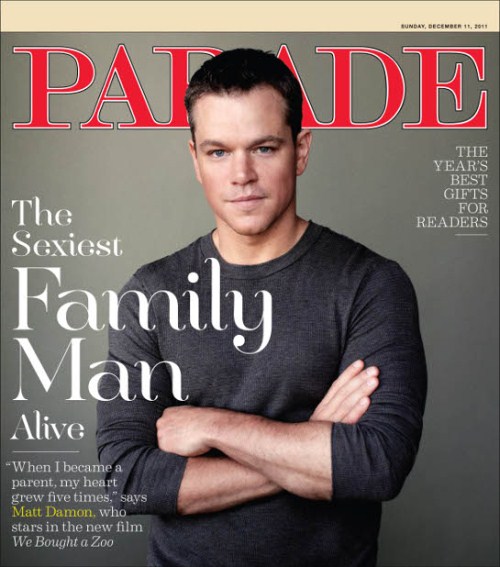 Matt Damon opens up about his low-key family life and how he avoids the media madness that plagues his famous pals in this Sunday’s PARADE magazine.

On being the father of four girls, ranging in age from 13 months to 13 years: Stella, Gia, Isabella, and Alexia, [wife] Luciana’s daughter from a previous marriage:

“I jumped into the deep end with Lucy. I mean, Alexia was already 4. I was an extra dad…The only way I can describe it – it sounds stupid, but – at the end of How the Grinch Stole Christmas, you know how his heart grows, like, five times its size? Everything is full; it’s just full all the time.”

Damon’s theory on why he can keep a low profile:

Despite his movie star status, Damon keeps his life private, especially compared to some of his famous friends.

“Brad and angie, there’s much more pressure on them than there is on me. He [Pitt] asked me what my everyday is like. I said, ‘Well, I grab the kids from school, and then we go over to the park.’ And he was just looking at me, like, ‘How can you do that?’ Because he can’t.”

“I’ve been left alone, even by the paparazzi, because what sells is sex and scandal. Absent that, they really don’t have much interest in you. I’m still married, still working, still happy.”