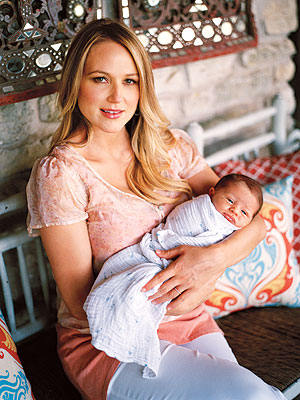 On July 11, the couple welcomed son Kase Townes after an unexpected emergency c-section that left the new parents slightly shaken, but happy to end up with their “mellow and chill” baby boy.

“We wanted a natural birth and I was committed to that. I studied hypnobirthing.”

At a routine check-up a week past her due date, doctors discovered that the baby’s heartbeat was dropping whenever Jewel had Braxton Hicks contractions, and the decision to undergo the surgery was made.

“I feel lucky to be pregnant in the modern age where they could actually tell he wasn’t well during those contractions,” explains the new mom.

“We felt thankful that we had good doctors and a good hospital nearby, and that everything was okay. I’m so lucky that we have a healthy baby boy. That’s all I cared about.”

Watching his son come into the world, Ty recalls, “I felt like somebody went to a cabinet, pulled out a perfect baby and handed him over. It’s overwhelming.”

“We had a name list a long time ago, before we were even married,” says Ty. “I like one syllable names.”

Now that the couple are settling into their new late night routine, the pair each have their own duties — dad Ty handles the dirty diapers before handing Kase off to mom for breastfeeding.

“Neither of us wants to have a nanny,” Jewel says.

“Ty wants his relationship with Kase to be special, and the time you put in is part of that. I just want to soak up this time with him.”

Kase — whose “little face changes day to day” — will grow up at home on the range as Ty, a fifth-generation cowboy, runs their property as a working ranch, tending to cattle and horses.

“I can’t wait until when Kase goes out there with me,” the co-founder of the Professional Bull Riders says, while admitting that he doesn’t necessarily want his son to follow in his footsteps.

“Jewel and I have to remember he is his own little person, and it’s all for him to figure out. Our job is to enjoy what his little journey is, not fret over it.”

Selma Blair Says She Hasn’t Lost Any Weight From Pregnancy

Jewel Is Releasing A Book For Kids

Jewel Not Worried About Losing Pregnancy Weight After Birth

Jewel Is Writing An Album For Her Unborn Son