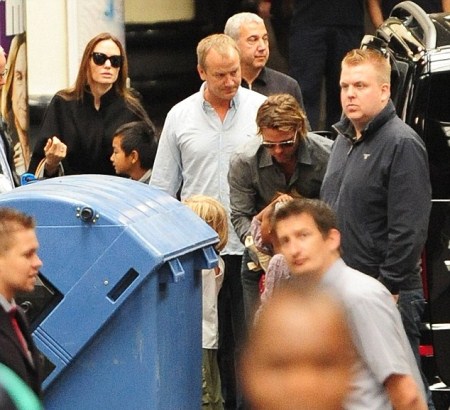 Brad Pitt and Angelina Jolie rented a whole train to take their family on a five hour journey to Glasgow, Scotland. The couple and their six children were seen arriving at Euston station in London. They were escorted to their own private Virgin train.

A spokeswoman for Virgin Trains confirmed to Mail Online that the couple had chartered a train for their trip to Glasgow. She wouldn’t reveal prices and said each client would be charged on their individual needs.

She added: ‘As far as I am aware, Brad and Angelina hired the whole train.

‘It is a bespoke service so prices would vary on the individual, people have different needs from station requirements to catering.’

Pitt is set to shoot scenes for his new film World War Z in Glasgow, Scotland.

David Beckham Says It Will Be “Interesting” When Harper Starts Dating