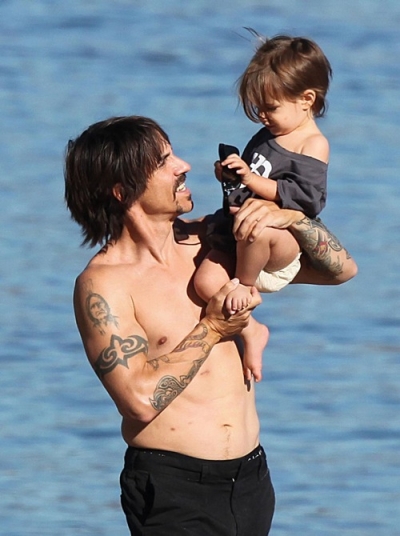 Red Hot Chili Pepper’s lead singer, Anthony Kiedis says having a son helped him forgive his father for the mistakes he made when bringing him up.   His father John Keidis allowed him to try drugs at an early age and even arranged for him to lose his virginity at the age of 11 to his own girlfriend.

“The fact my relationship with my son is so good makes me forgiving of my father and also appreciative,” he said.

“Now I can look back and say I actually like the upbringing I had, my father was very attentive and a great educator.”

“He just didn’t have the same tools I have today and there was no way he could have acquired them at that point in time. So, yeah, I forgive him for his mistakes and I thank him for giving me so much of his time and energy.”

Anthony Kiedis who used to be a heroin addict revealed that having a son helped give him extra motivation to stay sober and clean.

“As every heroin addict will know, temptation is always there. But becoming a father has given me a reason to live and stay clean for good,” he added.

“Every day since has been a battle to stay clean, but my son makes me thankful that I am. I feel very lucky.

“Having Everly has changed my life. You can hear the new energy I have, we have, on the new album.”

Kate Hudson: Being a Working Mom Is Not Easy