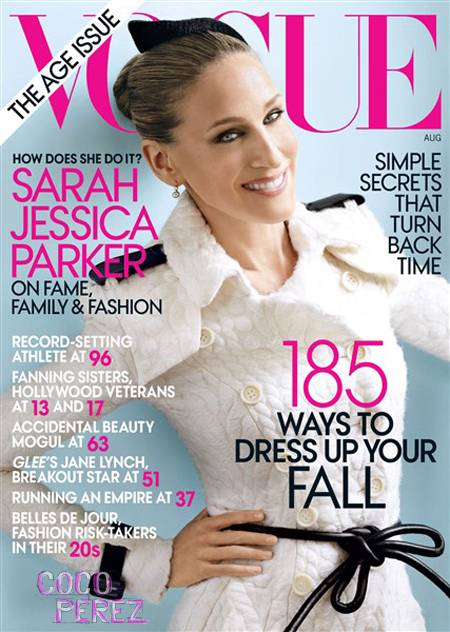 Sex and the City actress, Sarah Jessica Parker is on the August issue of Vogue, also known as “The Age Issue”. The former Carrie Bradshaw is opening up about her life as a parent, and how it’s not as easy and she makes it look.

“We don’t have any live-in help. We’re pretty hands-on parents. That’s something that’s important to both of us, and we don’t shirk it, because what’s the point in having a family if you’re not going to really participate in it, you know?” she said.

Parker is the mother to three children, James Wilkie, 8½, and now fraternal twin daughters Tabitha Hodge and Marion Loretta, 2. The 46-year-old admits that her first son was a piece of cake compared to the twins.

“Honestly, the only thing I’m concerned about is the energy: I hope I can maintain the energy. I think about all the years I’ve spent parenting James Wilkie and everything I put into it, and there are two of them,” she admitted.

“I’ve had a lot of opportunities to do the things that I wanted to do, like sleep. I have slept till 11:00 for a lot of years,” she continued.

Hopefully she stored up some of that energy to put towards her kids!