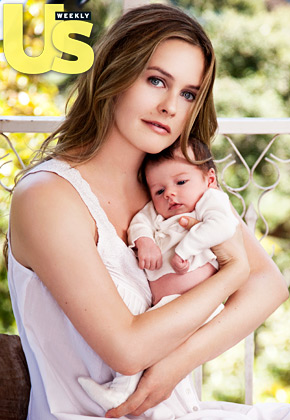 Alicia Silverstone debuts her first child, Bear Blu in this week’s issue of US weekly.

Silverstone and husband Christopher Jarecki welcomed Bear on May 5.  He weighed 7 pound, 15 ounces and,  “had crazy amounts of hair when he came out,” Silverstone tells. “He’s really calm.”

Siverstone didn’t leave her house after the birth because she wanted spend every second with her new son.

“I didn’t leave the house at all for six weeks after his birth,” Silverstone tells.

“I wanted to soak in every moment of his scrumptiousness.”

Octomom: I hate My Babies and My Older Children Are Animals!