Octomom: I hate My Babies and My Older Children Are Animals! 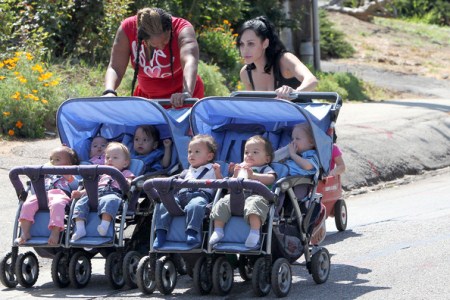 In a new interview, Octomom, Nadya Suleman makes disturbing comments about her 14 children. She claims she cannot stand her children and wishes she never had them.

‘I hate the babies, they disgust me,’ she told InTouch magazine.

Apparently, Suleman’s dream of having a huge family like Angelina Jolie have turned into her worst nightmare. Her children are becoming increasingly unmanageable.

‘My older six are animals, getting more and more out of control, because I have no time to properly discipline them.’

In Touch has a photo in which one child is eating dry-wall in her run down home.

Suleman, reveals that she has considered suicide.

‘Some days I have thought about killing myself. I cannot cope,’ she said.

‘The only way I can cope is to lock myself in the bathroom and cry. Sometimes I sit there for hours and even eat my lunch sitting on the toilet floor. Anything to get peace and quiet,’ she said.

At the end of the interview, she says she does love them, but wishes she never gave birth to any of them.

‘Obviously I love them – but I absolutely wish I had not had them,’ she said.

This woman is completely disgusting. She had these children to turn them into cash cows and now that they aren’t bringing in the cash she cannot stand them.  Now, the tax payer has to support her!