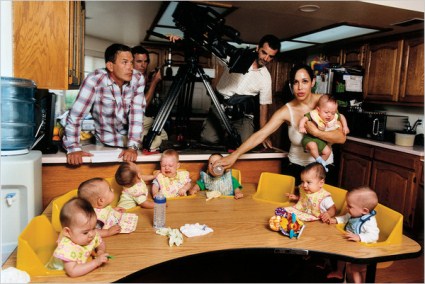 Times are tough for Nadya Suleman – better known as the Octomom. The single mother has been struggling financially for some time to raise her 14 kids. In March she went on welfare. Now she’s filed for bankruptcy.

The 36 year old made headlines around the world in January 2009 when she gave birth to Octuplets. She already had 6 kids. After three years of doing it tough she’s filed bankruptcy papers in the Federal Court listing her assets at just $50,000. It’s not known how much she owes. She says ‘I have had to make some very difficult decisions the year and filing Chapter 7 was one of them. But I have to do what is best for my children and I need a fresh start.’

Nadya has made a lot of controversial decisions when it comes to paying the bills. She recently stripped off for a British magazine. The gig paid a much needed $8,000. At the time Nadya told Closer ‘I have to do what I have to do to take care of my family, and I’m not ashamed. I’m not ashamed at all … I’ve never sacrificed my morals and values.’ The Mom also told HLN ‘If it’s a job, and it’s a well-paying job, and it’s going to allow me to get out of here and move in a very safe, huge home that they deserve, I’m going to do it.‘

The move to file for chapter 7 bankruptcy – the most serious form of bankruptcy – will draw a mixed reaction from the public. When she admitted to going on welfare there was a massive backlash. She was subjected to death threats and her Californian home was defaced.

Liev Schreiber Out with His Boys at the Park (Photos)