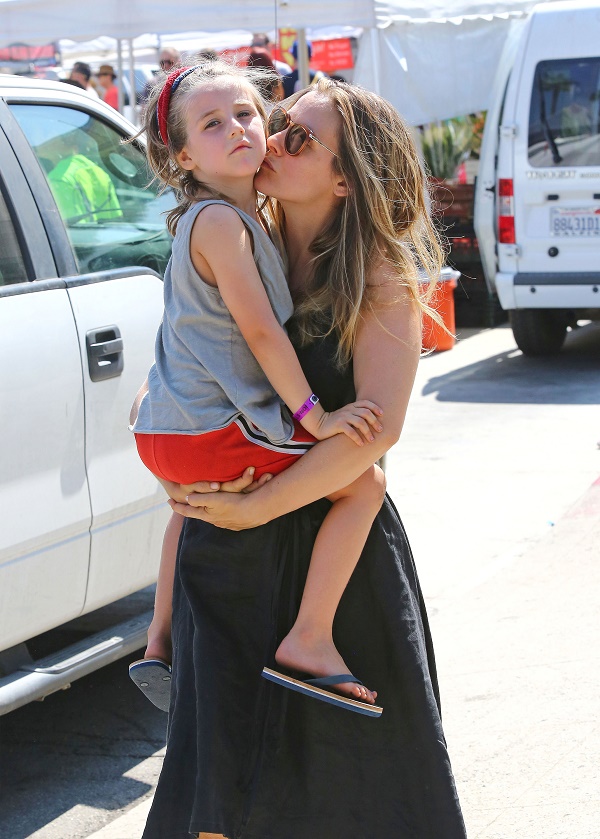 Alicia Silverstone and her adorable son Bear Blu were spotted at the Los Angeles Farmer’s Market on Sunday August 28th, the mother and son appeared to be having a blast together, and the happy toddler was all smiles.  Alicia appeared to be meeting up with a friend, who brought along their own little one to play with Bear Blu.

Alicia Silverstone and her husband Chris Jarecki were married in 2005, in 2011 she gave birth to their son Bear Blu Jarecki.  Since Bear’s birth Alicia has been putting her career on the backburner and spending time with her baby boy.  But, Bear isn’t such a baby any more, and Alicia is slowly getting back to work.

Alicia Silverstone rose to infamy in the 90’s with her first major movie, “The Crush.”  She worked on dozens of high-profile movies in the 90’s and 2000’s, she is well known for her parts in “Clueless,” “Scooby Doo 2,” and “Barber Shop.”  Silverstone also did a lot of voice work in animated films and TV shows.

After Bear Blu was born in 2011, Alicia put all of her focus on her family and baby.  Now, Bear Blue is 5 years old, and his mom is ready to get back to work.  The busy mom has signed on to a new TV show called “American Woman,” which is set to debut in 2017.  Plus, she has 6 films that are currently being filmed or in pre-production!  We’re happy to see that Alicia is juggling Bear and her career so well, despite all of her current projects, she still made time to take her smiley little boy to the Farmer’s Market – and it looks like they had a blast!