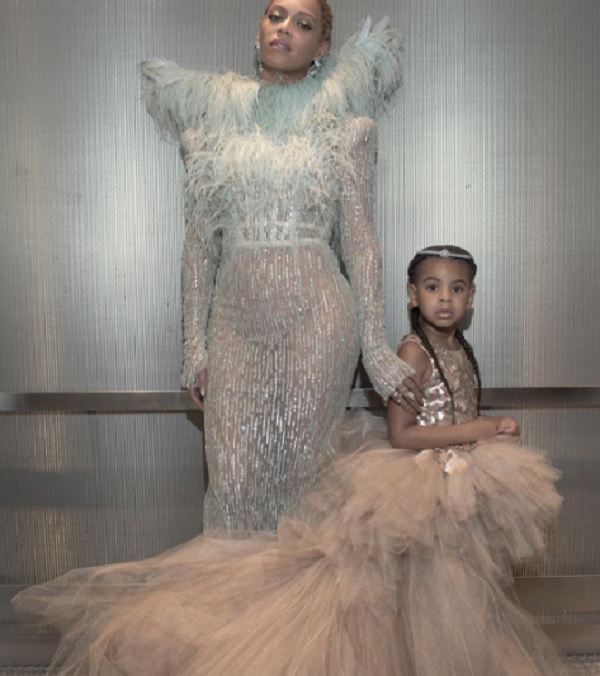 Like mother, like daughter!  No one can rock the red carpet like Beyonce, except for maybe her daughter Blue Ivy!  Well, in this case it was actually a white carpet at the MTV’s 2016 Video Music Awards in Madison Square Garden on Sunday, August 28 – but still Beyonce and her mini me looked amazing!

It wouldn’t be an awards show without Beyonce making a statement, and we love that this year she AND Blue Ivy made a statement together.  The proud mama walked hand in hand with Blue, Bey was rocking feathers and sequins and her and Jay-Z’s daughter was wearing a tulle gown with matching headband and sneakers.  And, it’s definitely worth mentioning that Blue was on her best behavior, she even stopped and posed for the cameras on queue like a little diva in the making.

2016 has been a big year for Beyonce, her Super Bowl performance and Lemonade video nearly broke social media.  Plus, her personal relationship with her husband Jay-Z has received a lot of media attention as well – both good and bad.  But, at the end of the day, Bey isn’t just a singing diva and world-wide superstar, she’s also a mom to adorable Blue.

Jay-Z and Bey don’t generally have their daughter in the spotlight, it was great to see her out and about and smiling for the cameras.  It’s hard to believe that their little girl is already 4 years old, and she will be turning 5 in January 2017!  She is growing up to be a beautiful and happy young lady!