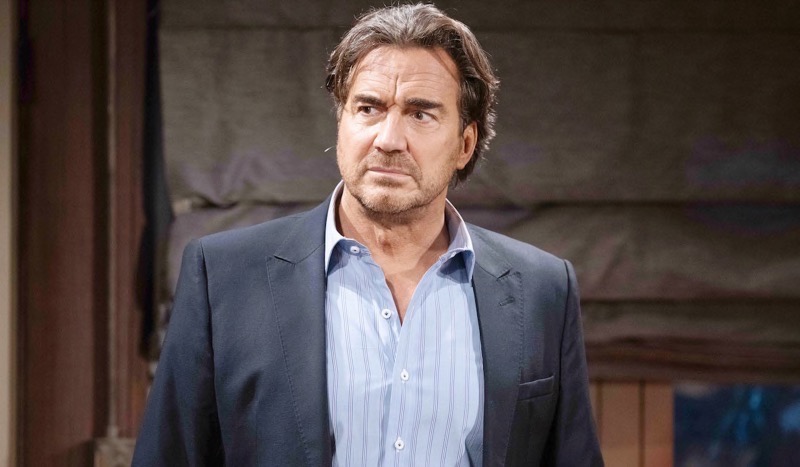 The Bold and the Beautiful (B&B) wants the audience to 100% blame Thomas Forrester for making such a mess of Brooke and Ridge’s latest marriage, but here’s a case for why Ridge only needs to blame himself.

Like most of the men on B&B, Ridge Forrester (Thorsten Kaye) can never admit when he makes a selfish mistake and also can’t last long without a woman by his side. For more than 30 years, he has waffled back and forth between Taylor Hayes (Krista Allen) and Brooke Logan (Katherine Kelly Lang), and now that they are all grandparents, nothing at all has changed.

This time around, Ridge ran to Taylor in Aspen after hearing a recording of Brooke making a call to CPS because she felt Thomas was an unfit father. What Ridge did not know is that Thomas Forrester (Matthew Atkinson) made that recording and that call when he used a voice-altering app on Douglas Forrester’s (Henry Joseph Samiri) phone.

Yes, we can see why Ridge would be angry at that, but what husband wouldn’t just come out and ask his wife if it was really true before flying off to find his ex-wife and begging her to return to him? Instead, he just vaguely asked her if she had something to tell him, but only AFTER he chased Taylor through the woods in Aspen when even she didn’t want to be with him at that point.

The Bold And The Beautiful Updates – Why Did Ridge Forrester Need To Rush Into A New Marriage?

Even if Brooke had made that call, couldn’t Ridge have spent some time on his own mourning his marriage before demanding an annulment and rushing to put a ring on Taylor’s finger?

He didn’t even tell Taylor why he suddenly decided he wanted her back until the night before they were set to walk down the aisle again. If Taylor had known, she might have suggested that they wait a while.

For a man who just wants honesty, he wasn’t honest with anyone. Sometimes Ridge needs to just look in the mirror and find the person to blame for his own problems. Thomas set the ball rolling, but Ridge made the next decisions all on his own.

Stay tuned to The Bold and the Beautiful on weekdays to see if Brooke and Ridge reunite again.