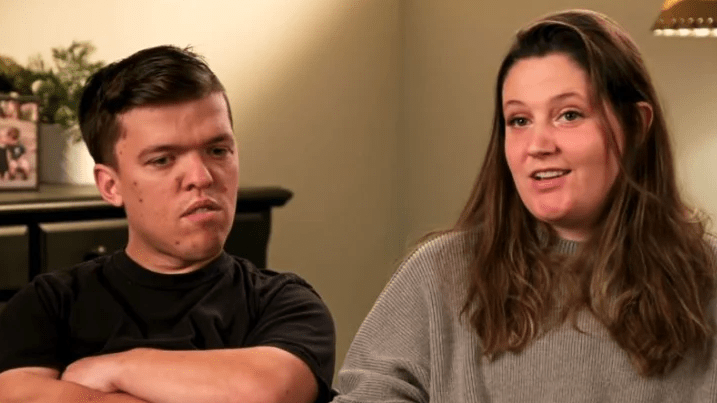 A year ago, Little People Big World (LPBW) stars Zach and Tori Roloff left the farm in Oregon and relocated to Washington. Meanwhile, Jacob’s wife Isabel was talking about moving to Oregon, but not wishing to buy a plot of Matt’s land. Before that, Matt hinted to Alec Lace on First Class Fatherhood, that he’d like to see Jacob farming a corner of the property. Now the dynamic has shifted does that explain why Zach is so grumpy? Some TLC fans seem to think so.

Teasers for season 24 reveal that Matt and Zach still have some tension between them. Recall, Matt wouldn’t sell Amy’s old portion of the farm to him. So, they got upset and relocated to Washington. As noted by Zach, the feud began some time back, and things change when folks work at trying to mend their fences. He said,  “Our real life is always a little bit ahead of when things are released. But we’re definitely working.”

Little People Big World fans know that Jeremy and Jacob took off and left the farm, as did Molly. While a lot of folks suspected that Zach did little to nothing on the farm, it’s not easy to manage any agricultural business. So, he probably worked hard for his dad. Obviously, he hoped to own a piece of the farm for himself one day. And, it’s not an unreasonable hope given his job there and Matt always banging on about legacy. However,  rumors arrived that Jacob Roloff might want to buy a piece of the land. Notably, he works there nowadays.

On November 2, u/BrooklynJewishMom shared a post on Reddit where Tori had said they might consider not filming. Anyway, diverse comments arrived, and one was particularly interesting. u/bevhars said, “So now I think I know why Zach and Tori are being so petulant; Jacob is living on a personal plot of land on the farm with his family and is working on it with future plans to buy it. Now it makes sense.”

Where did that rumor about the Little People Big World family arise? Tracking it down, revealed that The Sun carried the story in late October. At the time, the outlet cited an unnamed source. They said, “Jacob, 25, and Isabel, 26, have moved into a fifth-wheel camper home on a private property plot of land under heavy construction beside the Roloff farm.” Apparently, they live simply while they save cash. But, does that mean they want to buy the piece of ground that Zach was interested in? Notably, they don’t actually live on Roloff Farms, but nearby.

Is Zach Jealous Of His Brother Buying The Farm?

Last year, Isabel denied they wanted to take over ownership of Matt’s land. While Little People Big World fans assume that Zach is grumpy because Jacob replaced him so to speak, there’s no sign yet that Jacob has that intention. Perhaps Season 24 will shed some light on what is actually going on with Jacob Roloff.

Be sure to catch up on everything happening with LPBWright now. Come back here often for Little People Big World spoilers, news, and updates.

The Young And The Restless (Y&R) Spoilers: Is There Hope For Nate And Elena?