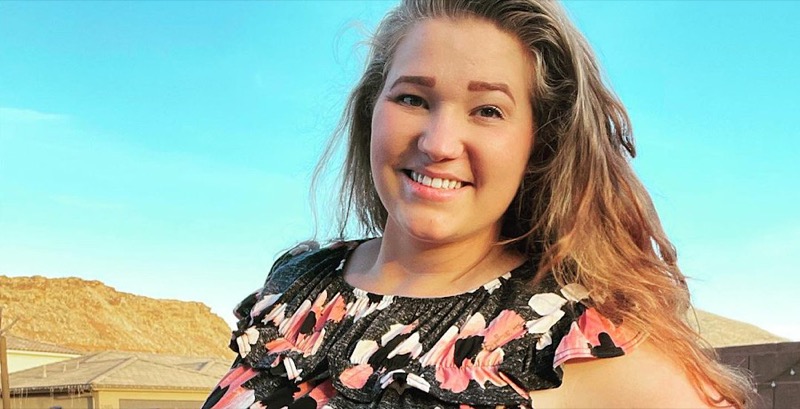 Sister Wives star Mykelti Padron expects twins, and there’s no mistaking that as she entered her third trimester. No wonder she complained of feeling a bit uncomfortable recently.  The daughter of Christine will soon produce the fourth and fifth grandbabies in Kody Brown’s family.  If you don’t know, she already raises Avalon, her very cute daughter. Well, she’s not afraid to normalize showing off baby bumps. And this week, she revealed the heavy load that she’s carrying at the moment.

The sixth grandchild will arrive early next year when Maddie Brown Brush births her next daughter. Maddie already had Axel and Evie and her gender reveal showed that she will have another girl. Meanwhile, Mykelti will give birth to her fraternal twins, and they are both boys. If you don’t know, fraternal twins are not from one split egg. Instead, they happen when different sperm fertilize different eggs at the same time.

Despite nearing the time for the delivery, the Sister Wives star seems to be ready for her babies. And, she seems happy about the pending arrivals. Due in December, they might be delivered a bit earlier, which is not usual for moms carrying twins. Keeping it light where she can, she and her half-sister Maddie posed at a pumpkin patch and “Boomped” their baby bellies. Well, sorry Maddie, but if you hope for a bump competition, you probably lost.

On October 29, Mykelti posted up some updates about the two boys. Stripped down to her bra and panties, she wasn’t afraid to reveal that she has some stretch marks. And, that seems to be a gigantic belly. In her caption, she told her fans that “Baby A is measuring 5.13lbs Baby B is 5.7lbs which is above average for their current stage.” Additionally, she talked about how she’s “seven weeks larger “ than if she went to full term with a single baby.

Sister Wives fans can expect that any day now, they will hear the news that the twins have arrived. That is because Mykelti said that the babies “are running out of room in there.” Certainly, she can’t go full term as she noted that the birth will happen sometime in the next three weeks.

Sister Wives fans took to the comments section of  Mykelti Padron’s post. One of them said, “No thank you! But huge props to you and your hubby! Just rest and let everyone that loves you wait on you hand and foot!
🙏Prayers for a safe and smooth delivery!”

Another fan wrote, “You are almost there! How exciting! Hope you can rest as much as you are able to!Best wishes & sending you lots of love !!!”

What are your thoughts about Mykelti Padron carrying such a heavy load of double trouble? Sound off in the comments below.