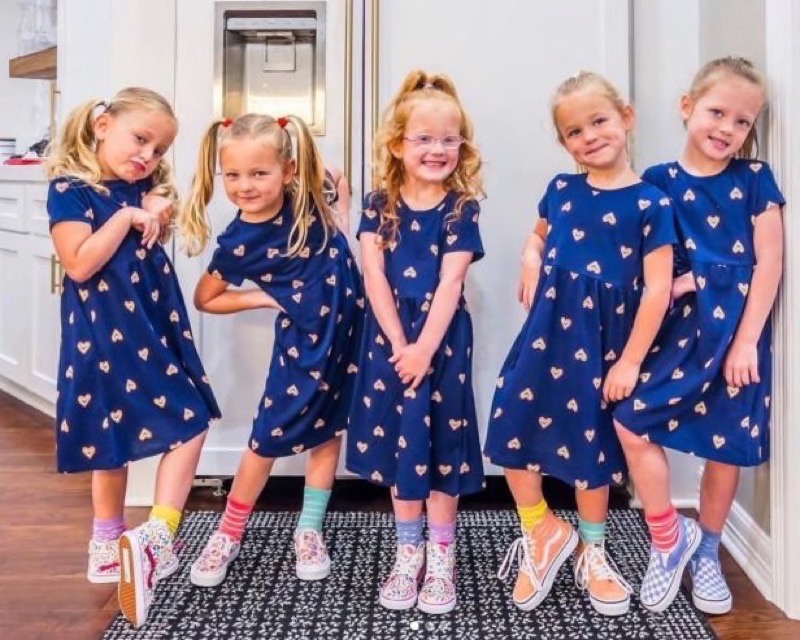 OutDaughtered spoilers revealed that the Busby quints, Riley, Hazel, Ava, Olivia, and Hazel moved up into second grade this year. Now that they are seven years old, their last traces of babyhood slide away into memories, and the girls look quite grown up. It’s been a fun summer, but now it’s time for back to school and fans predict it’s also time for jelly stink. At least until the weather starts really cooling off.

This time last year, when the quints went into grade 1, Danielle Busby found their homework heavy going. Actually, she wasn’t tired out because of the workload, but because it’s part of her nature to get things perfect. So, she had to fight the compulsion to just do it herself. Additionally, it took hours of supervision and that made her stressed a bit. Bear in mind, that she ran several businesses from home. And at the time, they still filmed for TLC.

This year, the OutDaughtered family took a hiatus from filming for TLC. That came after the news arrived that Danielle started her Graeson Bee brick-and-mortar store in league City. So, Adam took on extra parenting duties. However, judging by their school day photo outfits, it seems that Danielle was involved. Clearly, there are some things that she won’t miss out on, despite being busy at work.

Choosing to twin, Hazel, and Riley, and one twin chose grey and white. Then, Parker and the other twin selected greens. But, fans noticed that the kids all opted for jelly shoes. In the photo that Adam shared, Hazel sweetly held hands with her bestie, Parker Kate.  Meanwhile, fans couldn’t get over how long and pretty Hazel’s hair looked. Of course, some folks were not sure which twin was which, and we agree it’s not an easy identification.

In his caption, the OutDaughtered dad wrote, “Picture day for these 2nd Graders today! Love the little ladies they are growing up to be, attitudes and all 😝oh! And… the jellies 🩴 🤦🏻‍♀️😖.” Hashtagging Graeson Bee made sense, as the girls obviously wore the styles that Danielle gets a rep for. It didn’t miss the attention of TLC fans that the caption included a yucky-faced emoji when it talked about jellies.

OutDaughtered fans know that there’s nothing quite as bad as jellies for making stinky, sweaty feet. One follower wrote, “Oh I know them shoes bout to stink 😂.”

Another fan quipped, “Ahhhh, the Jelly foot stink x5…good luck to you. 😂”

Well, stinky feet or not, TLC fans still adore the whole family. So in the comments, plenty of people begged the Busby family to return to TV. Hopefully, next year, that will happen.

The Young And The Restless (Y&R) Spoilers: Greg Rikaart Reveals What He Got In Trouble For In School