Creepy Obsessions – Some Things Never Change For The OutDaughtered Quints 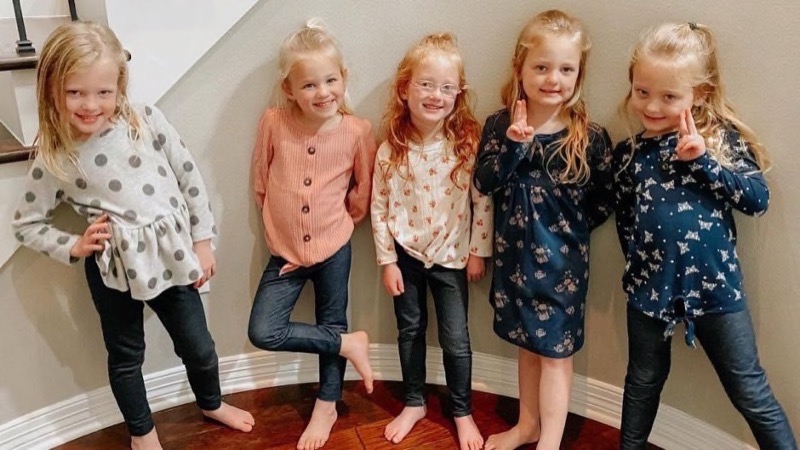 Probably, Riley Busby started the OutDaughtered quints off on their creepy obsession. However, TLC fans know that Hazel also has one. And, of course, all of the kids followed their sisters who seem super-curious. Although they are in second grade now and seven years old, it seems that some things just never change for the quints. So, what were the kids up to this week? Read on to find out.

Danielle Busby is a dog person and that’s about as far as she goes when it comes to loving animals with more legs than humankind. Of course, the quints and their sister Blayke also love the pooches. Especially at Christmas time when Gus and Beaux get involved in the festive season whether they like it or not. Adam’s favorite time of the year is Halloween, so perhaps the kids get their love for creepy things from him.

OutDaughtered fans saw in the past, that Hazel and Parker seemed to love June Bugs. Well, as for Danielle Busby, she’d prefer not to see them. But the girls don’t care that she has problems with creepy six-legged insects. Actually, her main issue lies with cockroaches. However, the kids haven’t yet developed a desire to play with them. This week, they demonstrated their love for other creepy things never changed.

Dinos are Riley’s favorite and Adam once said that they are his daughter’s spirit animal. However, with a drastic shortage of dinos in Texas, she quickly made do with collecting and adoring lizards. Thankfully, Adam taught the kids to handle them carefully and to always release them back into the wild after much inspection and fascination. Actually, competition seems fierce and this week, Parker Kate didn’t want to let the other kids handle the green lizard that she found.

OutDaughtered dad Adam shared a clip on Instagram this week, and Parker Kate looked very happy to hold her little green reptile. Of course, the other kids also wanted a turn. But, she let it go, which made the twins shriek as it dashed for freedom in their direction.  In his caption. Adam admitted that some things never change. He wrote. “Wait for it… they still love lizards.”

TLC fans commented about the OutDaughtered quints and their love for animals. One of them wrote, “Love seeing them explore stuff❤️.”

Well, their love for reptiles isn’t new, but it is fun to see that some things never really change as they grow up. Time is flying by and the girls still have the young zest and fascination for life. Probably, Adam will cherish these memories for the rest of his life.

The Young And The Restless (Y&R) Spoilers: Greg Rikaart Reveals What He Got In Trouble For In School