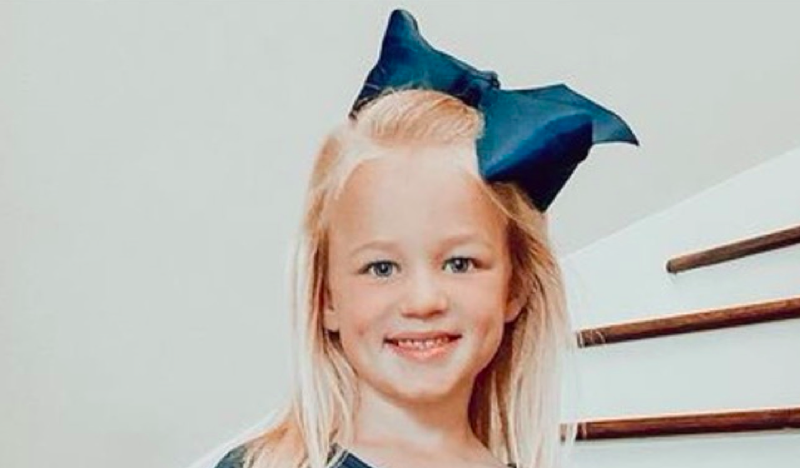 OutDaughtered quint Riley Busby is usually up for any challenge, if she feels interested enough, that is. Always outgoing and full of sass, she made her dad, Adam so proud this week, In fact,  he shouted her out in a day filled with adventure and fun. His daughters all went out together for a date with dad, and he didn’t disappoint them with the entertainment he planned. From his post, it sounds like he enjoyed the day as much as the kids.

OutDaughtered – Riley Busby Seems To Be Good At Everything

Although Riley always seems to challenge herself, she did draw the line at riding the sheep during a rodeo.  So, she clearly knows her boundaries. Very athletic, she obviously excels at almost every sport she tries. Mind you, she won’t be forced to do anything, either. For example, she opted out of fun with the other quints when it was too cold to be outside in the pool this winter. While the cute kid doesn’t take discipline well and is tempted to throw a fit if she can’t get her own way, most fans agree that she’s just so much fun to watch on YouTube and on the TLC show.

Like Olivia, Riley seems best at team sports, but she also enjoys a personal challenge at any time. That’s, except for ballet which she dumped quickly. Perhaps she found it repetitious and boring. Well, on their big day out with dad this week, she took to something new so well, that when he shared photos of the kids having a blast, he talked about how proud his gregarious daughter makes him feel. So, where did they go and what did the kids get up to?

In his post, Adam shared a lot of photos of the girls. He told them that they went to their favorite amusement place: the Texas Entertainment Xperience.  Of course, Riley loves being in front of the camera, so she made sure that she was featured in more than one of them. Anyway, in his caption, Adam said that he took the kids out for a day with “daddy.” He also added, “the girls had so much fun skating and jumping in the trampoline park. I was a little worried at first at how hard they were going to be to manage while skating (and lacing them up), but they rocked it and had a blast!” In fact, they enjoyed skating so much that they went back for a second turn.

The OutDaughtered dad was so impressed with Riley that he spoke specifically about her. Adam noted, “We even had a second mound of skating after jumping for a bit. Riley was taking on a group of boys on the dodge ball court and i couldn’t be more proud! 😆🙌🏻. It was a good day!.”

OutDaughtered fans all have their favorites amongst the quints, do Riley Busby didn’t steal all of the comments. One adoring fan wrote, “Love all the pics and videos of the girls and you skating 😍👏that was my thing as a kid I lived at the skating rink at their age.”

Another TLC fan who enjoyed seeing the kids noted, “They are so beautiful and they are growing up so fast. Miss y’all’s show. Hope y’all are doing well.”

The Bold And The Beautiful (B&B) Spoilers: Is Scott Clifton Headed For An Award?