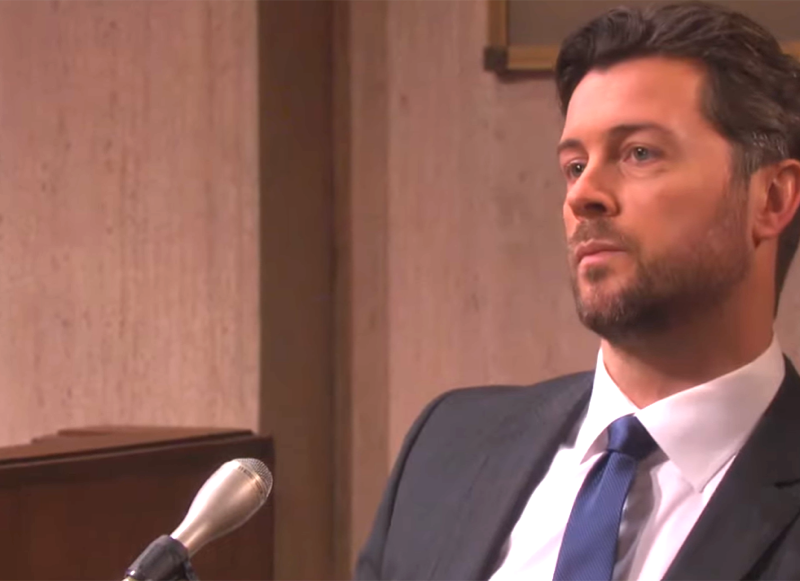 Days of Our Lives (DOOL) spoilers and updates tease that devilish chaos will erupt at the Salem courthouse during EJ DiMera’s (Dan Feurreriegel) trial in an upcoming episode of Days of Our Lives!

Days of Our Lives viewers will remember that EJ is on trial for kidnapping Sami DiMera (Alison Sweeney) and holding her hostage for several months in a remote cabin in Wisconsin. However, EJ was framed – by Lucas Horton (Bryan Datillo) who as Days of Our Lives viewers recently learned, was the real culprit, having been so desperate to get Sami back that he created a situation where he could be her hero! This makes Lucas, of course, nearly as conniving as his half-brother Philip Kiriakis (Jay Kenneth Johnson) who framed Brady Black (Eric Martsolf) for his own framed death, also over a woman – Chloe Lane (Nadia Bjorlin)! It would seem that dating by desperation runs in the family since both Lucas and Philip committed desperate and illegal acts trying to hang onto their woman, and both had the aim of eliminating their competition!

Days of Our Lives viewers will see that Chad DiMera (Billy Flynn) wanted to tell the truth at EJ’s trial but he is derailed – he had seen Lucas fooling around at Kate DiMera’s (Lauren Koslow) office. Days of Our Lives viewers will recall Chad saw Lucas using Kate’s computer, which he told him Kate was okay with and had given him the password-under most circumstances it might be believable. After all, Kate is Lucas’ mother, as well as Philip’s – maybe that’s where the two men got their conniving streaks from, as Kate has been known to connive if the situation called for it! Chad had told Kate that he wanted to tell the truth that he figured out about the frame at EJ’s trial, but Kate will be partial to her son, not to the devious EJ! Chad actually would not mind being rid of that egocentric half-brother of his, but he has to keep with the DiMera decorum and stand up for family-Chad is the least devious of the DiMeras. 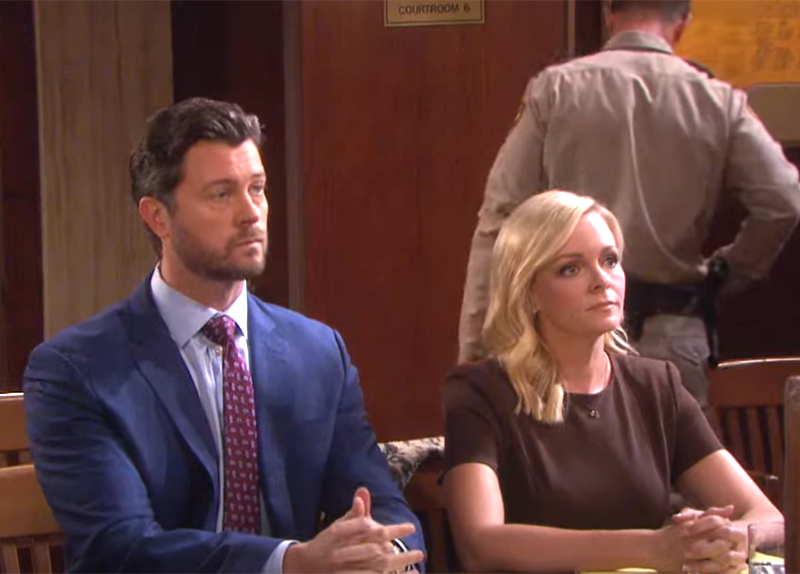 The Devil’s In The Details And Sitting In The Courtroom!

As if EJ DiMera and his explosive temper weren’t enough, Johnny DiMera (Carson Boatman) is sitting in the courtroom, and as Days of Our Lives viewers will recall, Johnny is definitely not himself! Days of Our Lives viewers will recall that EJ exploded in the courtroom and called out Lucas for kidnapping Samantha the day that Chad tried to testify-but whose side will “Johnny DiDevil” be on?

Days of Our Lives viewers can expect that Johnny will be on the DiMera side – obviously feeling that no one can measure up to Stefano DiMera (Joseph Mascolo) except maybe himself! If Johnny were himself and not devil-possessed he’d probably side against his father because they do not normally get along-it’s a toss-up whether he might shock everyone and side with Lucas! But the devil is a creature of habit – and chances are, Johnny DiDevil will influence the answers of those testifying or perhaps EJ; similar chaos could erupt that happened at Paulina Price’s (Jackeé Harry) wedding!