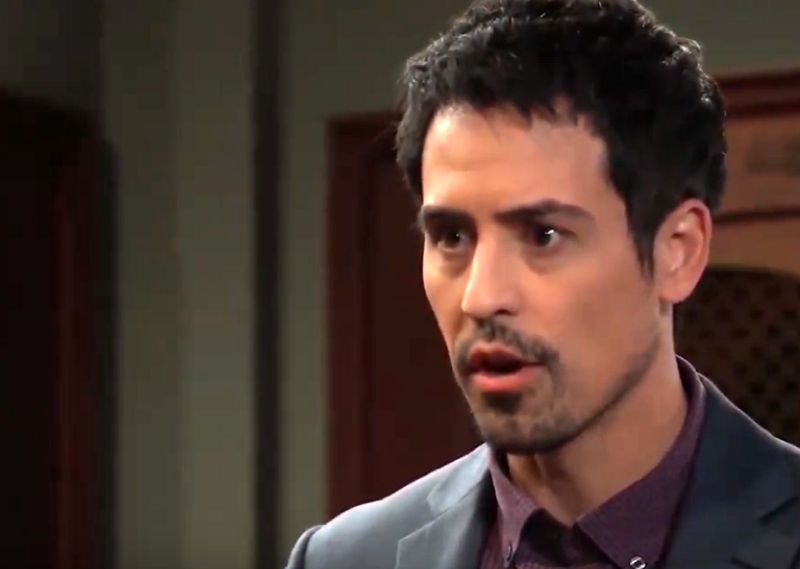 General Hospital (GH) spoilers and updates tease that Nikolas Cassadine (Marcus Coloma) will be pleasantly surprised when he makes a discovery in an upcoming episode of General Hospital!

General Hospital viewers will recall that the first rat to be caught in Nikolas’ trap at Ava Cassadine’s (Maura West) gallery was unfortunately himself! General Hospital viewers will recall that Nikolas told his stepfather, Dr. Kevin Collins (Jon Lindstrom) that he had set up extra security connected to his cell phone that would trigger a motion detector and ping him on his phone when someone entered the gallery.

Nikolas hadn’t counted on Trina Robinson (Sydney Mikayla) going to the gallery to look for Ava! Nikolas had thought she was at her graduation party at The Savoy! Nikolas’ cell phone pinged as he was still sitting at Charlie’s Pub talking to Kevin. Kevin warned him not to try to handle it himself, and Nikolas promised he’d call the police. Of course, he didn’t and Trina sprayed his eyes with pepper spray thinking he was a robber! She then used his cell phone to call Laura Collins (Genie Francis), telling her that her son needed her there at the gallery!

A grown man having his mother called to get him should have been enough to dissuade Nikolas, but it wasn’t! Trina later encountered the real stalker, dressed as a Ninja and she stepped under the trap that he had set up, which was a bucket that was supposed to tip and pour its contents on Ava, but Trina got it instead! Trina arrived at her graduation party, which Ava was at, appearing to be covered with blood, but it was probably just red paint or possibly blood from an animal! This was obviously the stalker, who had intended to frighten Ava, and had witnessed her drunken flirtation with Dr. Austin (Roger Howarth) at the Metro Court, and also saw that Nikolas was not going to divorce her!

General Hospital viewers will recall that one person who didn’t want Nikolas married to Ava was his son, Spencer Cassadine (Nicholas Chavez). The last time he and Ava had seen him, visiting him at his boarding school in France, was before they married, and shortly after Nikolas had come back to Port Charles and revealed that he was alive.

Spencer didn’t take too kindly to the visit or to his father, having grieved his loss from the age of ten or eleven, and then finding out Nikolas had been alive the whole time! General Hospital viewers can expect that Nikolas will stay with his plan and continue to monitor the gallery and Wyndemere Castle, possibly putting new hidden security cameras in both places. He will obviously set it up to ping his phone, including the tunnels under Wyndemere and the opening into the living room. Nikolas will realize that is how the stalker had to have entered Wyndemere, so he has to be familiar with the tunnels!

No one realizes the stalker is paying a bartender at the Metro Court to keep an eye on Ava and that was how the teddy bear with Ryan Chamberlain’s (Jon Lindstrom) voice got into their room. Nikolas gets a ping on his phone and this time he is prepared – he sees the “Ninja” and grabs him from behind and pulls off his mask, and realizes it’s his own son, Spencer! Nikolas is pleasantly surprised that the stalker is not Ryan and not a dangerous person, but he doesn’t know whether to be mad or relieved! General Hospital viewers can expect some high drama between father and son, however, and a nasty confrontation!