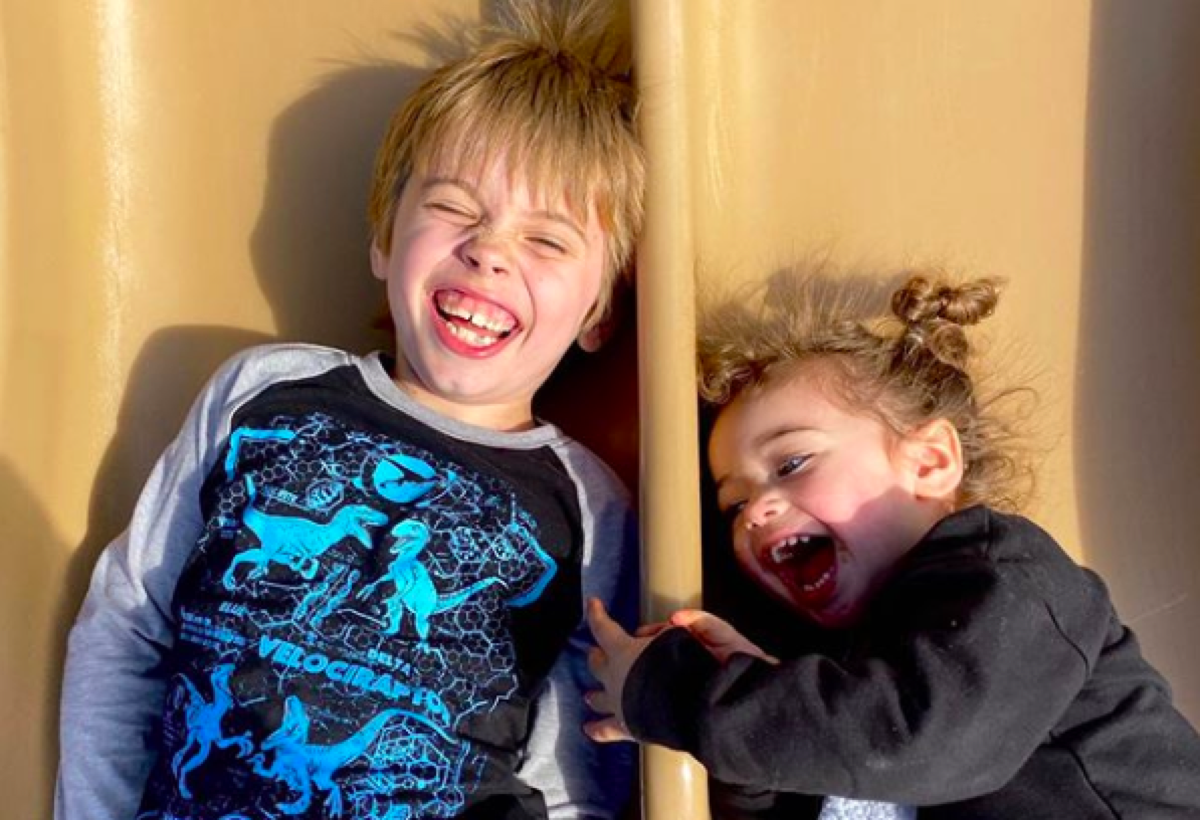 General Hospital spoilers teases that Emme Rylan’s two younger kids had a static-filled slide trip recently that she posted a cute picture of on Instagram with photo credit to her sister.

Just What Exactly Is It About Hair Static In Children’s’ Hair That Moms Find So Photogenic?

Just what exactly is it about hair static in our children’s’ hair that we as moms find so photogenic? Do we all have a secret fiber optic lamp fetish? It is a rare mom who doesn’t have at least one photo of their children’s hair looking like an adorable thistle! Some of us even rub the tops of our children’s heads with balloons to achieve the effect before taking the pictures!

Levi Thomas Money, born on November 3, 2011 and the baby of the family and only girl, Dakota Rose Money, born June 26, 2016 are shown in the picture coming down a slide with their hair in full bloom on the way down! You can almost hear the giggles by looking at their faces! Emme posted, “My sister caught the best moment of Levi and Dakota coming down the slide! That static though! #brotherandsister #love #bestfriends!” Ironically, most of us use hair spray or something to tame the wild frizz monster on our own heads, while thinking it’s cute on our little ones!

Emme and her husband, Don Money are the parents of three human children and four furry four legged ones. Their oldest son is of Jackson Robert Money, born on October 22, 2009. The four furry four legged children are two dogs named Hudson and Blue and two Himalayan longhaired cats, one named Jasper, and the other Cosmo, sometimes called “Cosmo Space Cat”!

The cats are gorgeous – they look like Persians as far as the long fur but have faces and markings of Siamese cats. Emme is an actress, fomrely known as Marcy Rylan, when she played Abby Newman on the CBS daytime drama, “The Young and The Restless” and Lizzie Spaulding on the defunct CBS daytime drama “The Guiding Light”.

She currently plays Lulu Spencer on the ABC daytime drama “General Hospital” and also is the proud crafter and owner of an Etsy shop, “Handmade by Emme” where she sells her handmade jewelry and knitted items through. Emme was born on November 4, 1980 in Providence, North Carolina, USA as Marcy Faith Behrens and has also done some film production. Her film production work includes “Bring It On: All or Nothing” (2006), “Shevenge” (2015) and “Impulse Black” (2011).

One of her best friends is fellow General Hospital actress Kirsten Storms, who gets together with her to make crafts in a shared dressing room on set, and Dakota Rose frequently has playdates with Kirsten’s daughter, Harper Rose Barash, her child with actor Brandon Barash.

Check out ABC’s General Hospital to see Emme as Lulu Spencer and her friend Kirsten as Maxie Jones (their characters are also besties!) Check Celebrity Baby Laundry frequently for all the latest news, updates and developments!