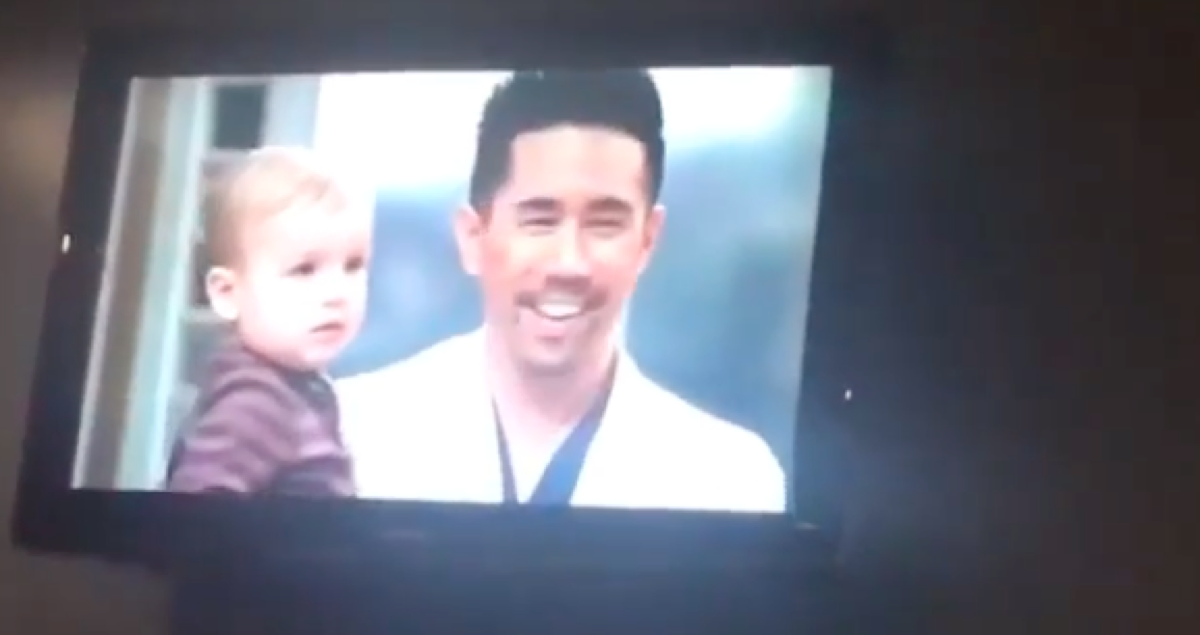 General Hospital Spoilers reveal that hilarity recently ensued on a General Hospital outtake as a baby actor gives his television birth father the side eye at an appropriate moment and his adoptive father cracked up!

GH Spoilers: Baby Erik Olson Is In The Shot With The Overwhelmed Adoptive Daddy And The Birth Daddy

Twins Erik and Theodore Olson play one year old Wiley Cooper-Jones on General Hospital, who was adopted on the show by Brad Cooper, played by Parry Shen, and Lucas Jones, played by Ryan Carnes. Chad Duell plays his birth father – only he doesn’t know it yet – Michael Corinthos.

Per Parry Shen, the twin in the shot is Erik. Michael Corinthos is also the baby’s godfather, Lucas being Michael’s uncle. In this scene, which Parry posted an outtake (mistake edited out of the film) of, Michael brought Wiley to General Hospital, where Brad works as a lab manager. Lucas and Brad were recently in a car accident in which Lucas had a traumatic head injury and is currently in a coma from which he may never emerge, leaving Brad on his own to take care of the baby.

Michael, as the emergency point of contact had been called to pick Wiley up from his daycare because he wasn’t feeling well, and brought him over to Brad at work, and explained that the daycare had called him because they couldn’t get any response from Brad, who’d forgotten to turn his cell phone on when he got to work! Michael chastises Brad, noting that Wiley didn’t have snacks packed for him and Michael had to pick him up, and you can see as he is telling him the baby turned his head, and gave both Michael and Brad dirty looks!

Parry posted this outtake in all his social media; Twitter, Facebook and Instagram, and posted: “Here’s what you DIDN’T see on today’s #GH right after Michael questions Brad being able to parent solo — me mustering every ounce of strength to keep from laughing before ‘cut was called.

Erik Olson was so in ‘the moment’ intently staring Brad down as if to say, “Smh. Yesterday you forgot to pack me a snack and today you were late for pickups. He’s right, dude. You’re losin’ it.” #outtakes” One can hear the laughter as Parry cracks up and some other laughing in the background as well! As the old saying goes, kids DO say – and DO – the darndest things!

Watch General Hospital to see Parry, Chad, and Erik and Theodore in action on ABC Daytime, and keep checking Celebrity Baby Laundry for all the latest news, updates and developments!