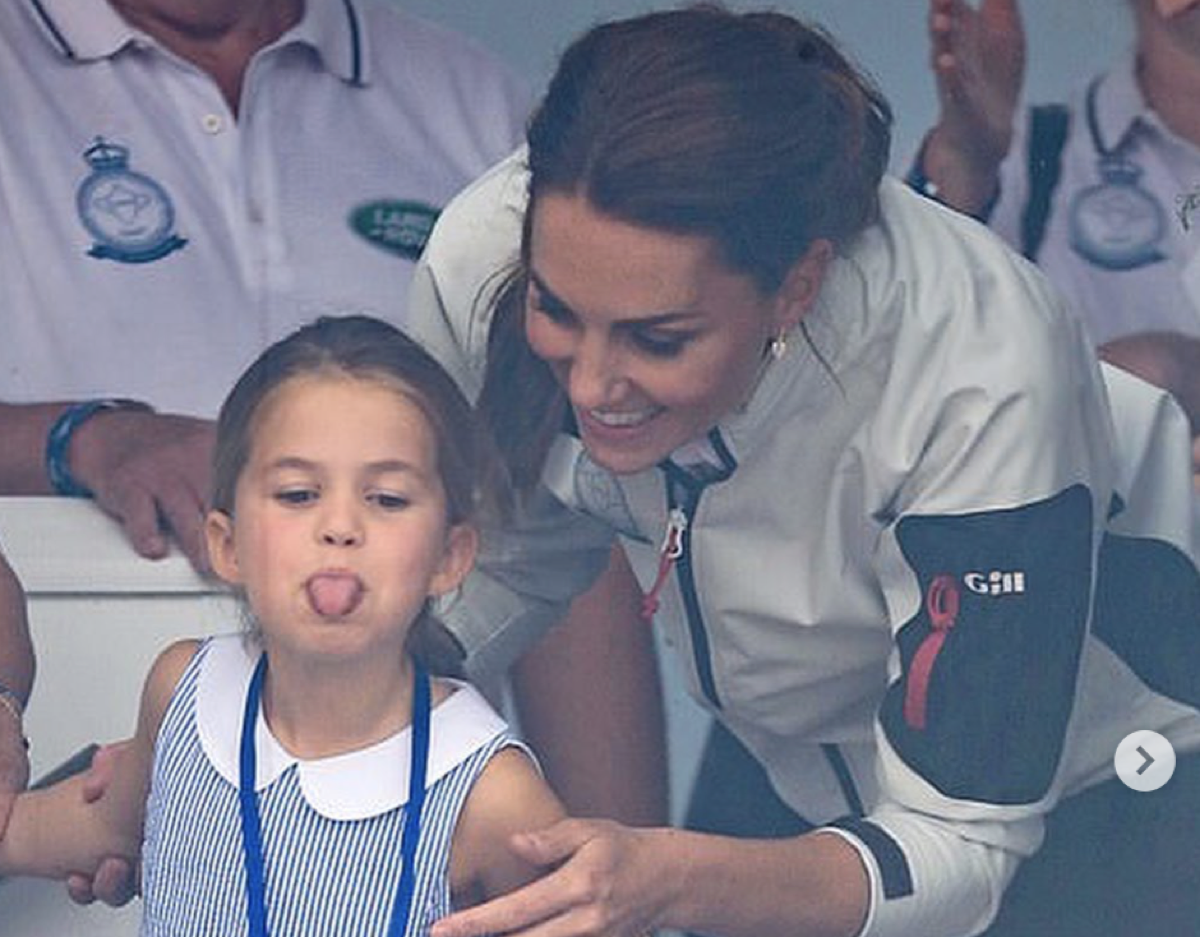 The King’s Cup Inaugural Regatta hosted by Kate Middleton and Prince William was a family day for the Cambridge’s. Prince George and Princess Charlotte enjoyed a day full of yacht races with their parents.

A naughty Charlotte, clearly having lots of fun, was caught on video playfully sticking out her tongue at someone. Royal watchers got a giggle seeing the youngster holding mum Kate’s hand as the Duchess of Cambridge encouraged the shy princess to give a wave.

Princess Charlotte has the Royal wave down, we’ve seen her do a great job aunt Pippa Middleton’s wedding to James Matthews where Charlotte served as a flower girl. The public got a glimpse of Charlotte’s wave again at uncle Prince Harry’s wedding to Meghan Markle.

We were surprised when, instead of waving, Princess Charlotte’s tongue popped out! A surprised Kate Middleton burst out in laughter then quickly moved the young princess along. Oops! An ordinary moment of an extraordinary life caught on video.

Donning a captain’s hat, Prince George looked on as the Duke of Cambridge and the Duchess of Cambridge captained separate teams during the King’s Cup Regatta. Prince George hung out with grandpa Michael Middleton from a spectator yacht and flashed a toothless smile while cheering on his parents.

Prince George watches the inaugural King’s Cup regatta hosted by the Duke and Duchess of Cambridge to raise awareness and funds for eight of TRH’s patronages on the Isle of Wight on August 8, 2019. . HE'S SO CUTE!! ♡ . #princegeorge #katemiddleton #princewilliam #dukeofcambridge #duchessofcambridge

In case you were wondering, Prince William came in third overall after coming third in the first race and fifth in the second.

Kate Middleton came seventh place in the first race and was disqualified from the second race after failing to return to the starting line when they began the race too early. Her team came in last overall.

Each of the eight boats that took part in the regatta represented a cause supported by the Duke and Duchess of Cambridge. Prince William was competing on behalf of Child Bereavement UK, The Royal Foundation was represented by Kate Middleton.

Dora and the Lost City of Gold: The Adventure Begins As Young Explorer Comes To The Big Screen (Promo)

How to Plan an Amazing Family Road Trip