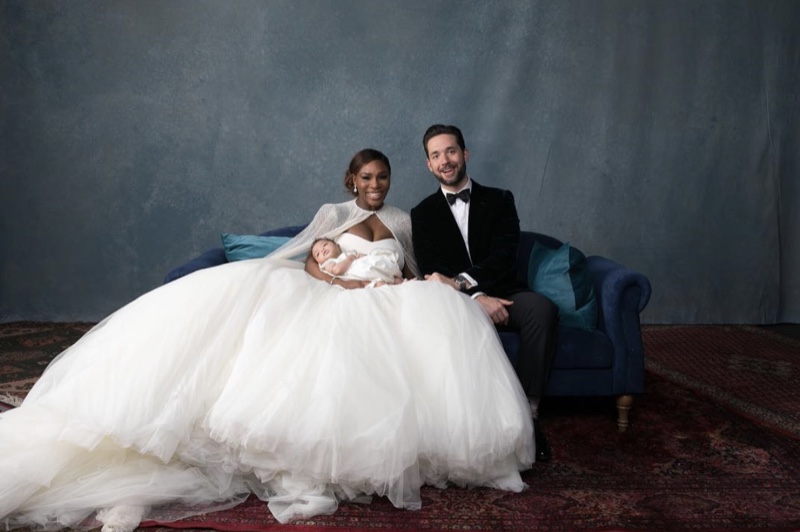 What a beautiful family!

In the photo, William sits on a blue couch while wearing a beautiful white Alexander McQueen gown with a cape as she cradles her baby Alexis Olympia in her arms. Ohanian smiles while seated next to his girls.

The pair married June 16, at the Contemporary Arts Center in New Orleans, LA.

According to Vogue, the center was transformed into a French ball and was inspired by Beauty and the Beast. The decor included a gold arch of flowers at the end of the aisle, long tables covered in lamé fabric, and lots of surprises.

@serenawilliams: You are the greatest of all time, not just in sport–I’m talking about as a mother and as a wife. I am so excited to write so many more chapters of our fairy tale together. And my whole life I didn’t even realize it, but I was waiting for this moment. And everything that I have done, everything that I am so proud of in my career, and in my life, for the last 34 years, pales in comparison to what we’re doing today. And I am so grateful, and I am so in love. 📸 @melbarlowandco @allanzepedaphotography

The two chose November 16 as their wedding date in memory of Ohanian’s mother, who passed away nine years ago.

“It is her birthday, and we wanted her to be represented at the wedding,” Williams told Vogue. “Obviously, we wish that she could be here for this, but choosing her birthday as our wedding date was a nice way of making sure she’s still involved and made us feel more connected to her on our day.”

Williams announced her engagement to the Reddit co-founder in December 2016.

They welcomed their daughter on September 1, 2017.

Mariah Carey’s All I Want for Christmas is You #AllIWantMovie

7 Ways to Teach Kids About Thanksgiving