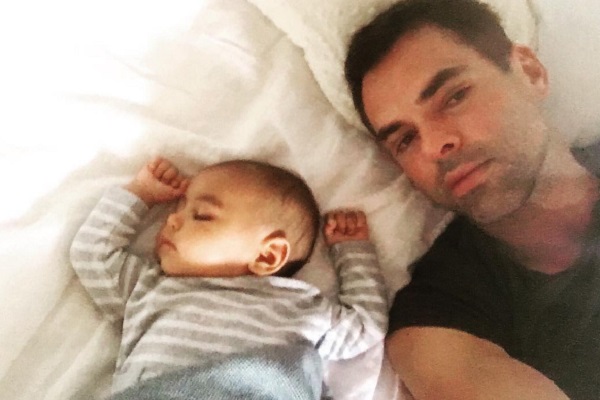 The Young And The Restless star Jason Thompson shared an adorable photo on Instagram with his picture perfect baby boy, Bowie Banjo Thompson.  Jason Thompson married his wife Paloma Jonas in April 2015, in May 2016 they announced the birth of their first child together – baby Bowie.  Since Bowie’s birth, Paloma and Jason have been keeping fans updated on their little one via social media.  He’s absolutely adorable and we can’t get enough of him!

Jason Thompson is a big player in daytime soaps.  He’s well known for his lengthy stint on the ABC soap opera General Hospital, Thompson played the part of Dr. Patrick Drake.  In 2016, Thompson left GH and joined the cast of CBS soap The Young And The Restless as Billy Abbott.

Currently Jason is involved in a huge storyline on The Young And The Restless, but he still finds time to cuddle with his little one.  This week the actor shared a sweet photo of himself lying in bed with a napping Bowie, captioned with some heart emojis and “Mondazzzzz.”  According to his Instagram, Jason and Paloma also recently took their happy baby boy on a family hike, and to FYF Fest in Los Angeles to enjoy some music in the park.

Are you a fan of Jason Thompson?  Have you been following his soap career?  What do you think of his and Paloma’s adorable baby boy and his unique name?  Let us know in the comments below!