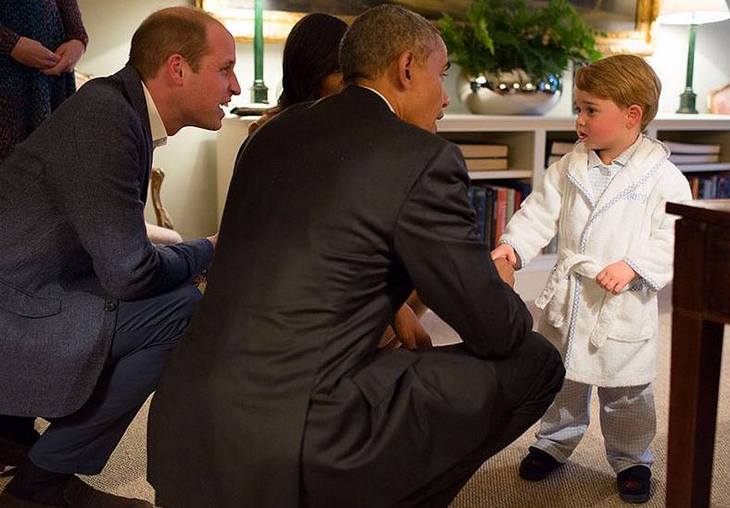 Prince George met President Barak Obama in his pajamas and the adorable photo will melt your heart. The President of the United States of America visited Kensington Palace after Kate Middleton and Prince William returned from their tour of India. The royal couple greeted Barak and Prince George made a surprise appearance in his PJs to greet the American leader.

In the images, shared on Kensington Palace’s twitter, the Duke and Duchess of Cambridge are dressed in formal attire, but little George is rocking a gingham blue pajama set with matching plush robe. George’s name is embroidered on the robe, and he completed the look with a pair of slippers. Barak Obama kneeled to greet the Prince who looked wide-eyed at the President. The little royal was allowed to stay up late to greet the President and First Lady, Michelle Obama. “George stayed up for a few minutes when the President and the First Lady arrived, but Charlotte was in bed,” a palace insider told People.

In another image, Prince George, still in his comfy pajamas, rode on the rocking horse the Obamas sent when he was born. The royal tot smiles happily as Obama and mommy Kate Middleton encourage the adorable Prince.

President Obama and the First Lady are being hosted by Prince William, Princess Kate, and Prince Harry at Kensington Palace for a private dinner. The Harry snuck in a double-kiss when greeting Michelle Obama upon their arrival. After the greeting, the President, the First Lady, and the 3 future monarchs enjoyed a chat before heading to a dinner arranged by Prince William.

Prince George always steals the show, for sure! The little Prince is adorable and that PJ set undoubtedly sell out very soon. What do you think of Prince George and the Royals hosting President Barak Obama and First Lady Michelle Obama? Let us know your thoughts in the comment section below.

Alessandra Ambrosio Soaks Up the Sun at Coachella With Daughter