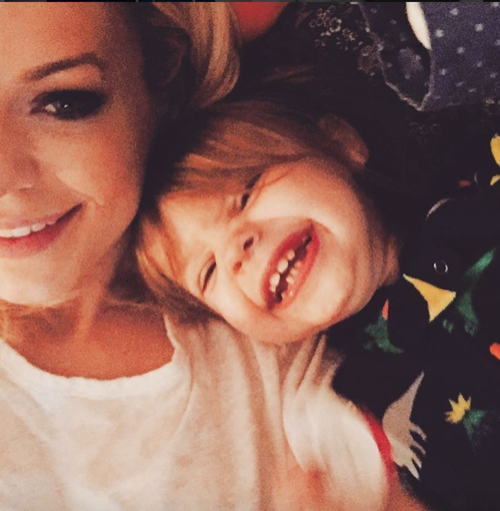 “General Hospital” Kirsten Storms recently had a few days off from filming and spent the day with her daughter Harper Rose Barash [Georgie Spinelli]. Kirsten shared some adorable photos of Harper Rose enjoying a ladies’ day at an amusement park.

Harper Rose is growing up so quickly! No wonder Kirsten and hubby Brandon Barash [Johnny Zacchara] want to spend as much time with her as possible. An outing at an amusement park is one of the joys of childhood.

In one photo Kirsten shared her little blonde mini-me is sitting in the car of an amusement ride – and it looks as if Bob the Builder is accompanying Harper Rose. Dressed in a cute little sleeveless T-shirt, jeans, sneakers and what looks like pink socks. Kirsten captioned the pic, “This lil munchkin…” Of course followers commented on how adorable and cute Harper is…and how much the toddler has grown! One fan commented, “Bob the builder, can she fix it, bob the builder, yes she can!”

In the second photo Kirsten shared Harper has added a pair of fashionable pink-framed dark shades to the outfit. Would anyone expect any less from fashionista Kirsten Storms little girl? Everyone commented on the cool shades! Kirsten captioned this pic, “We had a ‘girl’s day’ today.” A fan commented, “They grow up so fast, enjoy.”

Kirsten Storms and her mini-me Harper Rose Barash had a lot of fun during Kirsten’s time was from the “General Hospital” set. But, it’s back to work for mom. It is possible Kirsten and Harper Rose will get to spend some time together at work? Isn’t it time for Georgie Spinelli to pay a visit to Port Charles?

‘The Bold and the Beautiful’ News: Linsey Godfrey Enjoying Motherhood