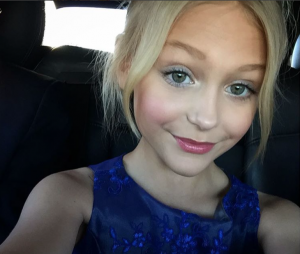 “The Young and the Restless” Alyvia Alyn Lind [Faith Newman] has been busy filming a made-for-television movie with the odd name “Untitled Miami Project.” The pint-sized actress portrays Allie Mae in the film.

It sounds as if the movie’s name may be subject to change! It does not have a release date yet or any information regarding on which network the movie will air. We can tell you that Elizabeth Perkins [“Ghostbusters,” Celia Hodes, “Weeds”] has been cast as JoJo Nickle and that Christopher McDonald [Judge Don Schakowsky, “The Good Wife”] will portray a character named Corwin.

This is Alyvia’s second made-for-television movie in a short period of time. You may remember that Lind was cast as a young Dolly Parton in the NBC movie “Coat of Many Colors.” Alyvia received rave reviews for her portrayal of the iconic award-winning country music megastar.

The synopsis of “Untitled Miami Project,” which appears to have filmed in Puerto Rico, reads: “A family man becomes a successful drug runner for a local Cuban drug lord in Florida during the 1970s.” Michelle Ashford wrote the screenplay and Mark Pellington directed the film.

It’s great to see Alyvia so busy, but we hope not too busy to keep her away from “Y&R” for long periods of time. It seems as if this young actress has a head start on a very successful career.

Congratulations Alyvia! All your hard work is paying off.

The Young and the Restless (Y&R) Spoilers: Nikki Means Well But Is Faith Too Far…

The Young and the Restless Spoilers: Sharon’s Plan Smart But Faith Resists…