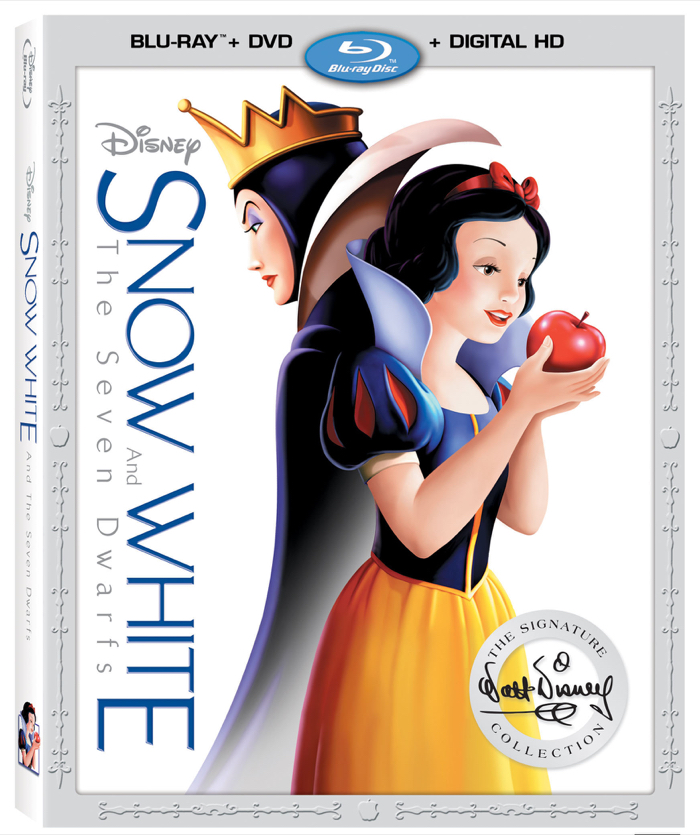 Making its reemergence as the first film of the Walt Disney Signature Collection is the classic fairytale of Snow White and the Seven Dwarfs.This new collection will include groundbreaking films created or inspired by the imagination and legacy of Walt Disney, featuring timeless stories and characters that have touched generations. I would say

If you’re one of the last people on earth to watch this timeless film you will be sure to fall in love with this story that was inspired by Grimm’s Fairy Tale by Jacob Grimm and Wilhelm Grimm. Snow White, a kind and beautiful princess makes an unsuspecting friendship with the Seven Dwarfs after running away from her step-mother, the wicked Queen. The Queen wishes to destroy Snow White, so she can take her place as the fairest in all the land. She eventually finds Snow White’s refugee and offers her a poisonous apple while disguised as an old witch. In her innocence, Snow White accepts the apple and falls into a deep sleep. This is where the prince comes into play. He must find Snow White and give her a true loves kiss and kill the Queen for the spell to be broken.

In my opinion, the true genius of Snow White and Seven Dwarfs is the outstanding songs from the film. Till this day I can still recite the lyrics to Whistle While You Work and Heigh Ho. Let’s not forget the utterly romantic Some Day My Prince Will Come either.  Whenever I think of Walt Disney these song instantly come to mind.

What sets the Blu-Ray + DVD + Digital HD edition apart from past releases are all the bonus features.

The Blu-ray™ Combo Pack of Snow White and the Seven Dwarfs hits stores February 2nd. The film can be bought online at Amazon and in-store at a retailer near you.
Disclaimer: Celeb Baby Laundry has not received any payment as a result of this feature. I received a sample in order to facilitate this review. All opinions are our own.
Continue Reading

Rachel Zoe Lunches With her Boys