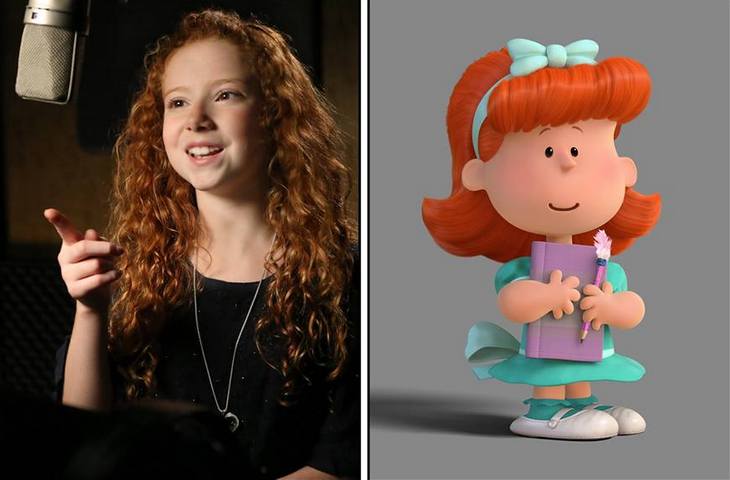 ‘The Peanuts Movie’ arrived in theaters across the country—bringing the world the first-ever 3D CGI Peanuts feature film. It’s a major moment for Peanuts, and it’s also major for a little 11-year-old, red-haired actress named Francesca Capaldi. You might recognize her from Disney Channel’s “Dog With a Blog.” Fancesca plays Charlie Brown’s unrequited love, The Little Red-Haired Girl. Capaldi has the honor of being the first person to give a voice to the character, who never spoke in any of the TV specials in which she appeared.

The Little Red-Haired Girl has never spoken before in any of the Peanuts specials — did you feel a lot of pressure being the first one to give her a voice?

“I can go both ways. It was easy not to have to base my performance off another voice that played her. But there was also pressure because I didn’t want to do a voice that people didn’t think sounded good for her. Basically I just used my natural voice. Steve [Marino, the director] really helped me create her voice.”

What kind of advice did Steve and the producers give you?

“Well, they wanted me to likeable and nice.”

Does the Little Red-Haired Girl like Charlie Brown as much as he likes her? Or is she going to break his heart??

“I cannot tell you that! They do end up being friends…that’s all I can say! We’ll just have to find out in another movie.”

What was it like recording your lines — I understand you were in L.A. and most of the other actors were in New York. How did it work?

“Yes, I was in L.A. with Steve Martino, so it was just me in the recording booth. A lot of the actors were from New York. So it was not quite like I expected. When I recorded, there was no contact with other actors.”

Was it as fun?

Who was or is your favorite Peanuts character? Why?

“I love Snoopy. He’s so awesome! I love how he flies his doghouse. He has such a great imagination. I also like Charlie Brown, too.”

Francesa is such a sweet kid! Have you gotten a chance to see the new Peanuts movie that is now playing in a theater near you? If you have, let us know your about your experience in the comment section below.

The Peanuts Movie: Our Family Review