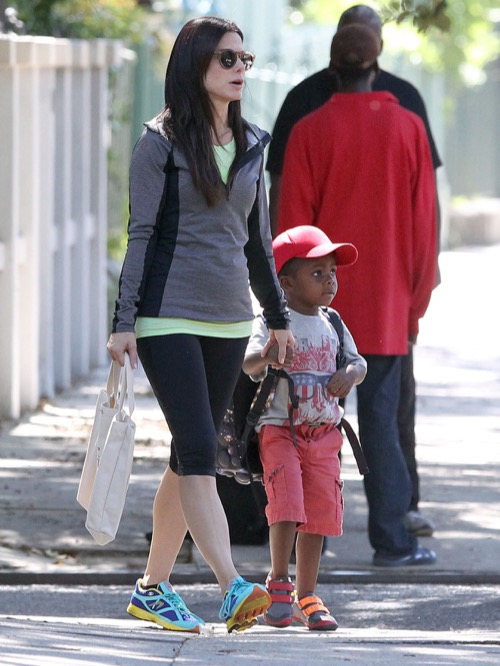 Sandra Bullock’s son Louis is already five years old! It seems like just yesterday that she stepped out with the adorable baby boy after completing the adoption process. But, Louis is growing up – and Sandra Bullock has been raising him on her own since she brought him home. Raising boys on your own is tough for any woman, but raising a little boy that is a completely different race than you are, that will have to face different social issues than you do – is even harder.

Sandra Bullock recently sat down with BET for an interview to promote “Our Brand IS Crisis” – and the topic of her son Louis came up. Sandra revealed that her son is only 5 years old, but he already knows about racism, and issues that he can face when he grows older. Sandra added that she has also taught Louis about sexism and homophobia.

The actress and mom dished to BET, “I think if you don’t start the conversation early on, you’re doing them a disservice. Once he leaves that house and I’m not with him, it’s his life and how he approaches it is his decision. But I want to know that I did the best I could as his mom to educate him on the ugliness in the world, and also the beauty.” Sandra added that Louis is too young to really understand why people are racist towards other people based on their skin color – but he absolutely knows that there are people out there who are like that.

Do you think that 5 years old is a bit early to be educating you children on racism? Or do you agree with Sandra? Share your thoughts in the comments below!