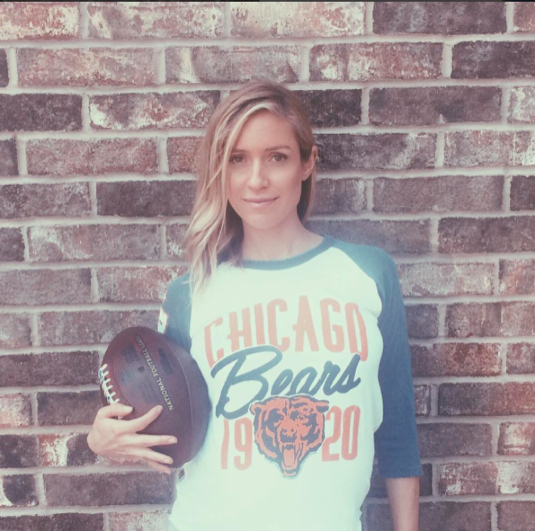 Kristin Cavallari opened up about her family life with husband Jay Cutler and their sons, three-year-old Camden and 16-month-old Jaxon Wyatt during a shoe preview of her Chinese Laundry collection.

The former reality star said life is a little more hectic when the football season starts for her Chicago Bears quarterback husband.

“We’re used to having Jay around a lot for the last few months,” she told People on Wednesday. “In the mornings, now, I’m by myself with the boys. I like the mornings with the boys, so I don’t mind that.

“Cooking dinner, for me, is a little bit harder because Wednesdays and Thursdays, Jay doesn’t get home until around 5:15 p.m., and we usually eat around 5:45 p.m,” she told, while adding, “I’m usually having to make dinner and it can be tough those nights because Jaxon, especially, needs a lot of attention. I’m usually holding him on one hip while I’m trying to cook.”

According to Cavallari, their eldest son is already a huge fan of football.

“It’s really cute,” Cavallari says. “He’s really into [football] now and he tackles Jaxon — which is not good — but I’ve been taking him to the games and he’s been having a lot of fun.”

Cavallari also admits she hasn’t mastered parenthood just yet and still has some bad habits she needs to rid herself of.

“I swear a lot, so that’s been tough for me, but I’m trying really hard,” Cavallari admits. “Camden said the F-word once. He said it like, ‘Mommy, why did you say f—?’ so he didn’t just say it for no reason. It really makes you catch yourself and make you be aware of what you’re saying all the time.”

Cavallari who is currently pregnant with a baby girl says this pregnancy has been mostly the same as the other two.

“I feel like I’m carrying slightly higher, so there must be some truth to [what] they say, you lose your shape with girls because you carry them higher and have no waist anymore,” she explained.