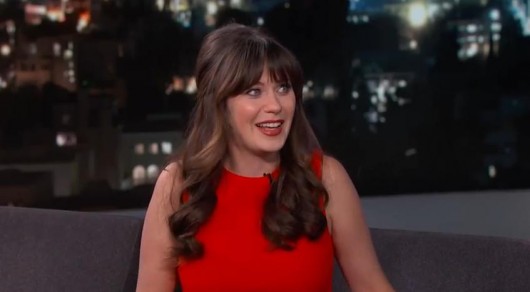 Zooey Deschanel loves being pregnant, but can’t wait to indulge in all the foods you’re not supposed to eat when you’re pregnant.

“You can’t eat so many things when you’re pregnant!” the New Girl actress told while making an appearance on  Jimmy Kimmel‘s late-night show on Thursday (Mar. 26). “If I was vegan, I’d just be like…ohhh.”

Deschanel went on to list all her favourite things.

“You can’t have sushi. You can’t have cheese that tastes good,” she explained of pregnancy. “You can have a little bit [of coffee], but I would have, like, four cups a day. And now I can have a half cup, which is a joke! It’s a total joke!

The star and her fiance Jacob Pechenik have opted not to find out the gender of their baby.

“We are gonna be surprised. It’s more fun. Make it into a game!” Deschanel told.

Deschanel announced in January she is expecting.